Certain magic has the ability to strengthen characters and weaken enemies. For example, Haste increases the speed at which your ATB charges fill, while Slow decreases the frequency an enemy uses special skills. Barrier reduces physical damage, while Manaward reduces magic damage.

The following is a list of status effects in Final Fantasy VII Remake. Spells and items can be used to apply beneficial status effects, also referred to in-game as "buffs", while many negative status ailments can be applied by enemies or the party. Negative statuses can be healed using abilities from the

All status effects, whether they're beneficial or ailments, have a set duration. Certain weapon upgrades can increase the duration of beneficial effects and reduce the duration of ailments. Another thing that affects duration is if the status spells are cast with

Magnify Materia, or the afflicted resists a debuff e.g. with

Positive status effects, or buffs, can be extended by the Enchanted Ring, and by many weapons that extend buff duration.

Regen gradually restores HP at 1% of their maximum HP every two seconds. It can be applied by the

Regen spell from the

Healing Materia, and when cast this way, last three minutes, providing 90 ticks in total, or a full 90% heal of their max HP. It is opposed to Poison, overwriting an existing poison status, and vice versa. It is also gained through Yuffie's Precision Defense: Regen weapon passive.

Barrier halves physical damage taken. It can be applied by the

Barrier spell from the

Manaward halves magic damage taken. It can be applied by the

Reflect will bounce magic spells back on the caster. It is bestowed by the enemy ability of the same name.

Haste will quicken the rate at which an ATB gauge builds by 30%. It does not otherwise have an impact on buff or debuff duration. It can be applied by the

Haste spell from the

Time Materia. It is opposed to Slow and Stop, overwriting the existing statuses, and vice versa. Haste lasts around 100 seconds.

Resist prevents status ailments being inflicted on a character. It can be applied by the

Resist spell from the

Cleansing Materia. Resist prevents all negative statuses on one party member for a duration of two minutes. However, if a character is already afflicted with a negative status at the time Resist is applied to them, that status will still remain on the character for its usual duration.

Auto-Life will automatically revive a target from incapacitation during battle. It can be granted by equipping revival earrings.

Poison gradually saps HP, but can't bring the afflicted below 1 HP. It can be cured using Antidote, Remedy,

Esuna or Chakra, and can be inflicted with spells from the

Poison Materia. It is opposed to Regen, overwriting an existing Regen status, and vice versa. It can be protected against with Resist, Star Pendant,

Silence prevents a target from being able to cast spells. Affected enemy abilities are marked with

Vulnerable to Silence. It can be applied by the

Silence spell from the

Sleep renders a unit unable to act until awoken. A sleeping character cannot evade attacks. It can be applied by the

Sleep spell from the

Slow decreases the rate at which a unit's ATB gauge builds. It can be applied by the

Slow spell from the

Time Materia. It is opposed to Haste, and the two overwrite each other. Protective Boots protect against the effect, as does Warding Materia+Time, or Ribbon in "Episode INTERmission".

Stop renders a target unable to act for its duration. It can be applied by the

Stop spell from the time materia. It is opposed to Haste, and the two overwrite each other. Protective Boots protect against the effect.

Toad greatly lowers a unit's damage in battle, and severely limits their movement speed, although they can use dodge roll through the

, which, when used repeatedly, is actually faster than normal movement. Characters under toad cannot cast spells, but can use abilities, albeit all are replaced by "Leapfrog", where the character jumps high in the air and descend with a flying kick, similar to Tifa's Divekick. Basic attacks are replaced by tongue lashes and leaps, with the tongue attack actually having very long range that can rival ranged weapons such as Barret's gun-arms.[note 1] The unique

ability is Bubble Breath, which sends three slow-moving projectiles that lingers in the air for very long time, dealing minimal magic damage upon contact, but being capable of flinching opponents.

Toad can only be afflicted on the player characters by three enemies: Sahagin and Sahagin Prince through Salientian Curse and Harpoon Hurl, and Malboro through Bad Breath. The accessory called Enfeeblement Ring also puts the wearer in a permanent Toad status, only really useful for potential challenge runs, or for preventing AI-controlled party members from killing enemies when trying to steal, learn enemy skills, or fill out Enemy Intel.

Each character has a unique model when afflicted by the Toad status effect, such as Cloud being a green frog and carrying a tiny

Buster Sword on his back, Aerith having a small pink bow on her head, Tifa being a black and white colored toad with suspenders and a skirt, and Barret being a large brown toad with sunglasses and a metal wristband on his right arm. In "Episode INTERmission", Yuffie becomes a green toad with a headband, her protective gauntlet and carrying a tiny 4-Point Shuriken on her back, while Sonon turns into a blue and purple toad carrying a tiny Marshalist's Staff on his back.

Characters under the Toad status can still use the command from

Parry Materia. Doing so will cause them to leap upwards, spinning. 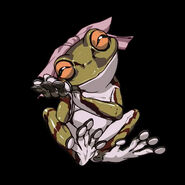 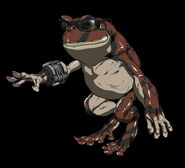 Elemental Materia.[2] The accessory called Fury Ring puts the wearer in a permanent Berserk status. In addition, Cloud can put himself in a short duration Berserk by holding the

to perform a combo while in Punisher Mode.

Fury quickens a character's limit gauge build-up, but causes them to take more damage. It is opposed to Sedate, overwriting an existing Sedate status, and vice versa. The status is healed with a Sedative.

Sedate reduces a character's limit gauge buildup, but causes them to take 10% less damage.[2] It is opposed to Fury, overwriting an existing Fury status, and vice versa.

Cloud as a Toad.

Barret as a Toad.

Tifa as a Toad.

Aerith as a Toad.