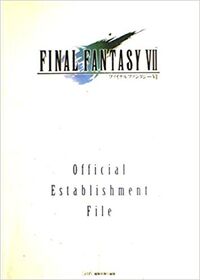 The Final Fantasy VII Official Establishment File is a book establishing the characters and the world of Final Fantasy VII. It was released on January 25, 1997, prior to the game's release six days later. The work was written by JK Voice, edited by Famitsu and published by ASCII Corporation.

The guide is notable for containing names in Latin-text uninfluenced by the official English localization, therefore many character names differ.

Prior to the main contents are double-page spreads of some of the game's character promotional art, featuring the character's Latin-text first and last name, a two-kanji concept, and text associated with the character. 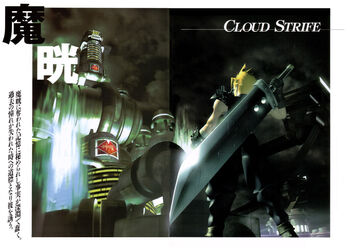 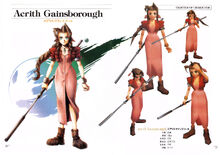 This chapter opens with a two-page spread including its title with Amano's artwork of Cloud and Aerith sitting.

For each playable character, the guide gives four pages: On the first is their name with their concept art in front of the Meteor from the game's logo. On the second are renders of the character's battle model and their biographical data including their age, height, blood type, hometown, and weapon. The third page gives a basic introduction to their story with screenshots. The fourth pages lists the character's Limit Breaks (aside from their fourth), and many of their weapons but not all, omitting the joke and ultimate weapons among others. Vincent's Limit Breaks are not listed, and Cait Sith goes into more detail about his Slots.

There are references in the data of the localization to both "Aeris" and "Aerith", however the game defaults to "Aeris" on the character naming screen. This name is also used in all supplementary material. Since the release of the localization of the first Kingdom Hearts in late 2002 she has been referred to as "Aerith" in all new localizations. See also: Aerith's name.

Barret's name was written "Barett" in Japanese publications, but the localization team opted for "Barret". Unlike with Aerith, Square did not insist on using their original localization, and as of the bilingual Final Fantasy VII: Advent Children Reunion Files in May 2006 "Barret" is used. The European manual spelling of "Barrett" is an error exclusive to that manual.

Tifa's surname does not appear in the game, however in the European and North American manuals and in the BradyGames strategy guide, her name is given as "Lockheart", with only the official site giving "Lockhart". As with "Aerith", starting just six months later with the release of Ehrgeiz: God Bless the Ring, Tifa's universal surname became "Lockhart" in all future releases (except the PC port of Final Fantasy VII).

This isn't listed in the contents, but there's a two-page spread of the hardy Datona here, featuring renders of the bikes from three angles, and then a large image of the render of Cloud wielding the Hardedge.

Sephiroth has his concept art on the first page, and a page for his story on the second.

This section is just referred to as (タークス, Tākusu?) in the Contents. This section uses the katakana (ルーファス, Rūfasu?) for Rufus in its title, but every other instance in the guide uses, while the game uses (ルーファウス, Rūfausu?). Rufus is referred to in the former way by NPCs in three instances of dialogue, while the latter has been used consistently everywhere else.

The names for the character are given in Latin-text as "Yrena" for Elena, "Zeng" for Tseng, "Rufus" for Rufus, "Rude" for Rude, and "Leno" for Reno. All these names were later changed to the English localization names in Japanese publications. "Zeng" was used in the credits for Last Order -Final Fantasy VII- in 2005, but he also signs a document "Zheng" in the content of the OVA, but in 2007 Tseng's name is written in-game as "Tseng".

The first page of this section shows the Concept art of the five characters in front of the Meteor logo, with the Shinra logo above. The second page briefly goes into the story of the five characters, while the third explains other terms related to Shinra (the Shinra Company (where it mentions the main Shinra employees), Mako, Materia, and SOLDIER).

There is a sub-section titled 神羅カンパニー関相図 (Shinra Kanpanī Sōkan-zu?, lit. Shinra Company Relationship Diagram) that features a chart of the structure of Shinra. Heidegger, Reeve, Scarlet, Palmer, Hojo, President Shinra, and Sephiroth appear on this chart in addition to Rufus and the Turks. Some of the playable characters appear below a bordered-section, connected to with links of "destiny" (因縁, innen?). Barret ties to Scarlet, Red XIII ties to Hojo, and Cid (who lies on the border of Shinra and not-Shinra) is linked to Heidegger. Cloud and Aerith are also featured on this chart but do not connect to anyone. Cloud, Aerith, and Barret are shown with their portraits from the game, however Cloud uses his young Cloud portrait (which was also used in early development of the game, including in the demo).

There is also a sub-section on "Shin-Ra motor mobiles" (神羅モーターもビル, Shinra Mōtā Mobiru?) which features renders of the trains and cars.

This section is not featured in the contents. The section includes renders of Bahamut, Leviathan, Ramuh, Titan, and Ifrit. All of these summons are assigned the same name as in the localization, except Leviathan who is written "Liviathan".

The section features renders of the summon models and screenshots of their summon attacks. 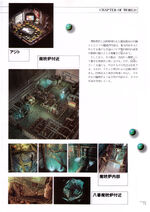 The first page is a two-page spread featuring the section title and Amano's Cloud on the Hardy Daytona artwork.

The first two pages feature a depth map of the entire World Map. The World Map is discussed and the camera is explained with pre-release screenshots.

The section goes on to feature the backgrounds of the game and briefly discusses the locations. The backgrounds featured are from many areas of Midgar (extensively), the Chocobo Farm, Mt. Nibel, Junon, Mt. Corel, North Corel, Gongaga, Cosmo Canyon, Da-chao Statue, underground area of the Forgotten City, and the Mythril Mine. Also included is the unused watery cave background.

This section is not featured in the contents. It gives a list of all the Materia in the game with their effects.