iOS, Android
Final Fantasy VII G-Bike was a free-to-play video game for Android and iOS platforms. It was a racing game based on the minigame featured in Final Fantasy VII.[1] The game was shut down on December 15, 2015.[4]

G-Bike featured characters riding along courses as with the original minigame. However, G-Bike allowed the ability to switch what type of bike the player uses, and to customize it using Materia. There were also obstacles for the player to avoid, so they need to jump and slide.[5] Similar to the original minigame, the player fought several enemies along the track, although spells could also be cast; for instance, ice-based spells could be cast against Bombs to do more damage. Limit Breaks could also be used, which had been seen to summon other characters from the cast of Final Fantasy VII, such as Tifa Lockhart. Cloud could also get new outfits and drive through different locations apart of Midgar.[6]

The game went up for download on October 30, 2014 but suffered problems with its downloads. While technically available, service for the game was taken down until November 1st so the problem could be fixed.[8] On September 16, 2015, Square Enix announced on the game's official blog that it would be shut down after struggles to satisfy the game's users. In-game purchases were available until October 15, 2015 and the game itself was shut down on December 15 2015.[4]

Cloud riding after a Behemoth.

A Shinra MP pointing his gun at Cloud.

An artwork presenting one of Cloud's alternate outfits.

Tifa powering up an attack. 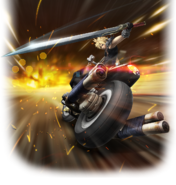