The Dollet dukedom, at war with the Galbadia Army have requested 'Garden' to dispatch 'SeeD'. The world renowned special team 'SeeD' from 'Garden'. The high-speed vessels in which they ride are about to land in Dollet dukedom...

Final Fantasy VIII had several demos released; for both the PlayStation and PC versions. The first PlayStation demo is known for playing slightly different from the finalized version, with Rinoa included in the party, Selphie and Quistis absent, and the scene's original music, which ended up being replaced, still intact.

In Europe, a slightly more polished version of the Final Fantasy VIII demo came with a special issue of the Official PlayStation Magazine, and a second demo disc featuring early cuts of the "Liberi Fatali" and ballroom scene FMVs respectively was packaged along with the Platinum Edition (re-release) of Final Fantasy VII.

In France, the disc came with the October-November 1999 PlayStation Magazine special issue. The only notable difference with the retail game was stronger characters. It was relatively easy to defeat X-ATM092, which was called Goliath.

A demo version without Rinoa also exists that is closer to the final game.

Differences from the final game[]

The demo takes place at the Siege of Dollet, with Rinoa in the party replacing Seifer and Selphie for the bits they are playable in the finalized game. The characters wear their normal clothes instead of the SeeD cadet uniforms they don in the final game, and the demo's FMVs are altered to show Rinoa in place of Selphie and the different wardrobe; the characters' facial structures also differ slightly from the final game's FMVs. The dialogue is completely different, with some terms translated differently. The unique personalities of Squall, Zell, and Seifer aren't exhibited as much.

At the beginning of the demo, the opening FMV has radio chatter not present in the final release, and the scene at the beach is longer with Seifer explaining the party's objective, as the demo lacks the scene where Xu explains the mission within the vessel. All other NPCs from Balamb Garden are also absent. Since Seifer isn't in the party, he doesn't inform Squall and Zell to save the battle EXP for him. At the Central Square, Seifer swings his arm without his sword, and when Zell comments on the dog licking Seifer, Rinoa can be seen laughing as Seifer shoos the dog away. Instead of calling Zell a "chicken-wuss", Seifer mentions how taking the dog along would prove more worthwhile.

The communications tower (called "antenna facility") doesn't have the Blind draw point the final game has. Because Selphie is absent, her introductory FMV and dialogue aren't present, and the party can't jump down the cliff towards the tower. Unlike Selphie, Rinoa vanishes after the tower activation FMV plays. Biggs is a Lieutenant instead of a Major, and when fighting the party, the camera does not pan towards Wedge when he joins. Afterwards, a Dollet soldier delivers the withdrawal order instead of Selphie, and he boards the elevator with Seifer. There are only 15 minutes to reach the shore, rather than 30. At the demo's end, Squall and the others rush back to the vessel and the X-ATM092 is destroyed by a Dollet soldier instead of Quistis. Production credits appear overlaying the FMV and the scene cuts off as the vessel leaves the shore, ending with a message stating "Winter 1999".

The Dollet evacuation FMV in the final game still has some remnants from the demo version. During the scene where Selphie and Zell run across the beach toward the camera, Selphie has Rinoa's shadow. When the X-ATM092 searches for its target, the scene is black and white and grainy and from the robot's point of view; Squall running toward the vessel was re-rendered in a SeeD cadet uniform, but Rinoa and Zell in his casual clothes still appear small in the background, instead of Selphie and Zell in his cadet uniform. The Dollet soldier can also be briefly seen as the ship pulls away.[1]

The demo is more difficult due to the disabled menu, which prevents the player from customizing the party, and the characters can't level up. The Experience page on the Battle Results screen is skipped, and the Item page has both

listed as "button to exit" instead of just the former saying "Confirm". The party also has less HP overall. Due to the nature of being a demo, there are no save points present.

The party has Leviathan, which is the only Guardian Force that can be summoned. Leviathan's Tsunami attack can also be seen temporarily turning enemies blue as they take damage. The largest number of spells that can be drawn at once is only three, and the Cast option is placed above Stock. The draw animation is also more erratic, with the blue spheres circling around in mid-air. Squall has Fated Circle instead of Rough Divide for his C. Sword finisher and the player cannot enter Zell's Fight commands; instead, Zell performs a scripted Limit Break. Even though Rinoa is in the demo, she has no spoken lines and nobody refers to her whatsoever. She also has no Limit Break and cannot use the Draw command, but only she can summon Leviathan into battle. The summon command is formatted as "G.F." instead of GF.

Character and enemy models are more vibrant, and more enemy attacks are named, such as Biggs' Arm Slash. Most sound effects, with the exception of Zell and Rinoa's basic attacks, are different. Squall's signature sword swing at the start of battles also doesn't make a sound. Also absent is the boss battle screen transition. Unlike Dollet in the final game, Mesmerize and Buel can appear in random encounters. Some monsters have different drawable magic: Anacondaur has Thunder and Blizzara; Mesmerize has Fire, Cure, and Double; and Elvoret has Fira, Blizzara, and Cure. Elvoret can also use a Needle Tail attack. The X-ATM092, referred to as X-ATM082, is considered impossible to destroy (except in the French demo) due to the party's lower HP, the lack of customization, and the stricter time limit.

The demo has two extra dummied command abilities that were removed for the second, non-Rinoa demo: Fortify and W-Item. W-Item works the same its equivalent in Final Fantasy VII and uses two items per turn, and Fortify casts Cure, even if its description suggests it would heal a Guardian Force. Despite Rinoa not speaking in the demo, she has an unused line: "I wonder how many enemy reinforcements are coming." The demo also has a limited debug room, with half the options being jumps to non-existent maps, and the other half of the options simply being broken. One hidden area contains an unused additional encounter with the X-ATM092.[2]

During the demo, the track "Raid on Dollet" plays, which was replaced by "The Landing" in the final game, with "Raid on Dollet" not being included in the game's original soundtrack. Although no official reasoning has been given, it is presumed that "Raid on Dollet" was taken out due to sounding too similar to the theme of the film The Rock, composed by Nick Glennie-Smith and Hans Zimmer. There also exists an earlier version of the track, "Attacking Dollet", which received slight quality improvements.

The demo uses slightly different versions of Don't Be Afraid, The Winner, The Loser, and Never Look Back. Force Your Way is not featured.

A version of "Prelude" plays in the PlayStation demo's menu that isn't included in the full game.

Copies of Parasite Eve included a bonus disc containing a trailer of Final Fantasy VIII with footage of the demo, featuring a different battle UI and an unused track, "Visions of Dollet".[3] The theme was later used in trailers for Final Fantasy X included with copies of Final Fantasy: The Spirits Within.[4][5][6]

The PC version demo was available for download shortly before the game was out. It included the the ballroom scene and Squall and Quistis's trip to the Balamb Garden training center, ending with the boss battle against Granaldo. All the dialogue plays the same as in the finalized game, but notably, the party has Leviathan, a Guardian Force not available at that point. Due to limited junction magic available, the PC demo is also harder than the final game, especially if the player ends up encountering the T-Rexaur.

The party landed in Dollet. 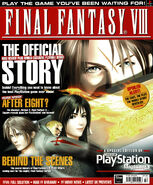 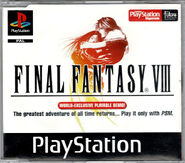