February 10, 1997
May 10, 2004 (re-release)
The Final Fantasy VII Original Soundtrack is a four-disc compilation of the music contained in Final Fantasy VII. There are 85 tracks distributed on four CDs with music composed, arranged, and produced by Nobuo Uematsu.

Called by Uematsu his "greatest harvest" in terms of creativity, the soundtrack, despite its length, was composed in a period of eight months[1], as opposed to the bi-annual period of producing that had become the standard regarding the previous original soundtracks. The Final Fantasy VII soundtrack was innovative in that it was the first game in the series to include a track with digitized vocals, "One-Winged Angel", which has been described as Uematsu's "most recognizable contribution" to the music of the Final Fantasy series.

Uematsu has said that the transition from SNES to PlayStation made him look forward to what he could do with the new hardware, and was happy they were able to experiment with things they hadn't been able to do prior to the development of Final Fantasy VII. One thing that came up in the early stages was that the developers wanted to include a theme song with lyrics, but it never really happened, apart from "The One-Winged Angel", but Uematsu doesn't consider this song as the game's theme song in the sense they had originally envisioned.[2] Uematsu has also noted the part of experimenting with new ways to insert and apply music was the best thing to happen with Final Fantasy VII to him personally.[2]

Despite it being possible to record CD quality music for PlayStation games, Square decided to do the music for Final Fantasy VII with the PlayStation's internal chip because as far as sound quality goes, the developers felt the hardware was more than capable with its higher dynamic range than the Super Famicom, and 24 simultaneous music output channels (the Super Famicom had 8), allowing for more complex compositions. Eight channels would be reserved for sound effects, leaving 16 for the music.[3] The sound effects were recorded in the studio, but the music is all the console's internal chip putting less demand on the read access time of the CD-ROM; faster load times were prioritized over better sound quality.[4]

The team wanted to have a soundtrack with no repeated music to mimic movies, although depending on the scene the tempo or the intensity might change. As Final Fantasy VII is a long game some music is repeated, but the overall goal was to make it as cinematic as possible in that regard.[4]

The field music (titled "Main Theme of Final Fantasy VII") has a unique flavor compared to Square's RPGs of the past. Uematsu intentionally eliminated the uptempo meant to encourage the player to embark on a journey. Instead, some parts rise melodiously and some parts make the player feel insecure, creating various expressions within the same field of music. Uematsu hoped players would get a different feel from it compared to previous RPGs and has described it has this his own "experiment."[3] A music theory analysis of "Main Theme of Final Fantasy VII" was written by Video Game Music Academy in 2014.

He used keyboard and guitar for the basic compositions, and read the story and script as he composed. Due to the volume required of the soundtrack Uematsu worried he would run out of time. He'd first compose a theme, then program it in, and then revise it. There was no guarantee the PlayStation hardware would have the kind of sound he was looking for, and the sound quality was sometimes very different. For that reason there ended up being many unused songs.[4]

The Compilation of Final Fantasy VII greatly expands the body of musical works of the Final Fantasy VII universe. Nevertheless, the most popular themes among fans remain a part of the original soundtrack, which include "Prelude", "Those Who Fight", "Fight On!", "J-E-N-O-V-A", "Cosmo Canyon", and the previously mentioned "One-Winged Angel".

The English track names have been adapted from the iTunes tracklisting.

The credits are all written only in English. The Chorus credits are for One-Winged Angel.

There is one thing common in all the Final Fantasy games. None of them are complete. All of the games are results of staffs from all around the world trying their 200% effort and ambition. Too much ideas are packed in, while the game becomes blurred and unfocused. New ideas are being incorporated, but only dry and arid works come out. I think that is what we need to focus on to improve right now. Still, as a staff of SQUARE, I really don't think it is a big problem in the long run. If I were to compare it with a plant, the FF will be a plant given premium nutrition, water, and light without the care of a gardener. The branches will just extend in their own way, in any direction. A spring clean-up is necessary. The Final Fantasy series is nearing its spring clean-up. The flower might blossom in the next work, or maybe later. Though, we are confident that we will someday present you a COMPLETE work.

Well, speaking about the incompleteness of Final Fantasy, the music in it is not an exception. Still, I have put out everything I have right now so I began to see what I really need to work on in the new environment. It think that was the greatest harvest this time. Let me thank every staff, every SQUARE member, my family, and friends. I am also grateful to you fans, from the bottom of my heart. Thank you very much.

A limited edition of the Final Fantasy VII: Original Sound Track was also released. The set includes illustrated liner notes with several pictures of Uematsu's workspace, various CG and battle shots from the game, messages from Nobuo Uematsu, Square producer Tadashi Nomura, and Digicube music director Kensuke Matsushita, and a discography, alongside several pages of text. The set comes in a black box with the Final Fantasy VII logo engraved on a thin metal plate. 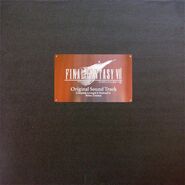 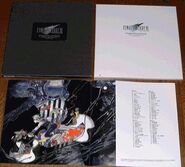 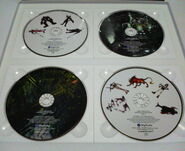 July 24, 2019
Final Fantasy VII Original Soundtrack Revival Disc is the complete soundtrack for Final Fantasy VII on a blu-ray disc with high-quality audio. It includes the ability to view game visuals with the music. MP3 files are also included on the disc for portable music devices.

Published by DOREMI Music Publishing, the book contains Asako Niwa's piano arrangements for the music on the Final Fantasy VII: Original Soundtrack, arranged to sound as much as possible like the originals on the piano. The difficulty level is beginner to intermediate.

An excerpt from Haydn's "The Creation" is played in President Shinra's office as Sector 7 plate collapses.

When asked to name his favorite three tracks from the soundtrack, Nobuo Uematsu named the overworld theme, the Desert Canyon theme and Aerith's Theme.[1]

The original 1998 trailer of Final Fantasy VII features a piece of music called "Final Encounter" by Steve Baker that isn't featured in the game or soundtrack.[6]