Final Fantasy VII: On the Way to a Smile was released simultaneously with Final Fantasy VII: Advent Children Complete on April 16, 2009, collecting the short stories in book format, with the Japanese revised version of "Episode: Barret", as well as three new episodes: "Episode: Yuffie", "Episode: Nanaki", and "Episode: Shinra", and two "Lifestream" shorts.

Advent Children Complete also included On the Way to a Smile -Episode: Denzel- Final Fantasy VII, an OVA adaption of "Episode: Denzel" by A-1 Pictures and BeStack.

This story is told indirectly through the perspective of Denzel, the young orphan featured in Final Fantasy VII: Advent Children. Four years after Meteorfall, Denzel meets with Reeve Tuesti and requests Reeve let him join the World Regenesis Organization (WRO). Denzel proceeds to tell Reeve about his life prior to the fall of Meteor; the narration includes Denzel's parents dying when the Sector 7 plate fell, living with Reeve's mother afterward, and ultimately surviving Meteorfall and becoming a scavenger in the ruins of Midgar before being rescued by Cloud.

This story consists of Tifa Lockhart's account of the events following Meteor's destruction, overlapping in part with Denzel's story. Tifa, Cloud, Barret, and Marlene open a bar in the city of Edge, and try to begin their new lives. Barret eventually leaves to settle his past, and Tifa, Cloud, and Marlene form a family, including Denzel after Cloud finds him. Cloud becomes increasingly distant and secretive, a problem compounded by his job making long-distance deliveries, trying to hide away from them. Though Tifa tries to keep the family together, Cloud leaves and does not pick up when she calls his cellphone.

This story centers on Barret Wallace and his search for meaning in his life. Barret seeks a way to atone for his past actions as AVALANCHE, eventually helping Cid work on his new airship. When Barret learns of the fatal plague Geostigma, he decides to try and help the infected find treatment, and heads off to find a source of fuel for Cid's airship so they can help the world reach a cure if one is found. Barret also acquires a new prosthetic hand during the story, the story detailing his trouble in finding a suitable prosthetic when he first lost his real hand, the doctor who gave him his gun-arm explaining his desire for a weapon as a prosthetic symbolizes his hatred for Shinra and inability to let go of it.

This story centers on Red XIII, now known by all as Nanaki, depicting his inner struggle between living as a human or an animal, as he is more intelligent than normal animals, but is largely viewed as a beast by humans, and thus he is torn between which part of society he belongs in. He must also deal with an inner entity he called "Gilligan", spawned by his fear of what losses the future may bring him due to his longevity.

This story follows Yuffie Kisaragi as she returns to Wutai in the wake of Meteor's fall and must help those injured in the Lifestream's eruption. Later, the people become infected with a disease from Midgar, and blame Yuffie for it, believing she brought the illness with her from Midgar. Almost two years later, the disease, now known as Geostigma, still plagues the village, and Yuffie has spent much of her time treating the injured and attempting to find a Materia to cure them.

This story centers on Rufus Shinra and the Turks, and follows their actions during and after the end of Final Fantasy VII. Shortly after fleeing to Kalm, the Turks search for Rufus and oversee the excavation of the ruins of Midgar and the construction of Edge, while Rufus is held captive by Mütten Kylegate and later Kilmister, both seeking to use his influence for their own purposes.

This story is further divided into two parts "Black" and "White", and each part has three chapters and focuses on Sephiroth and Aerith. Sephiroth's portion of the story details his actions to inflict the Planet with Geostigma and create his avatars, while Aerith's portion follows her trying to heal the dead of Sephiroth's darkness and trying to find a way to help Cloud defeat the infection on the planet's surface and see him again. 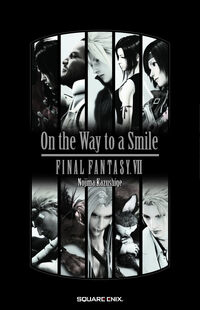