Cid Pollendina: Oh, shut up and help me remodel the Final Fantasy Tactics Daizen page!
Please expand this article into a full one. The following tasks need to be completed: 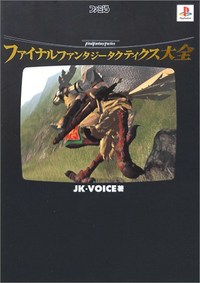 The Final Fantasy Tactics Daizen (ファイナルファンタジータクティクス大全, Fainaru Fantajī Takutikusu Daizen?, lit. Final Fantasy Tactics Complete Guide) is a guide book for Final Fantasy Tactics for the PlayStation by JK Voice and published by ASCII on August 22, 1997. A revised second edition was published by Enterbrain on October 6, 2000. Often referred to by fans as the "Black Book" (黒本, Kurohon?) in reference to its black binding, the book is infamous in Japan for having various errors, most famous of which incorrectly stating that the Masamune and Genji equipment can be stolen from Messam Elmdore (which was not possible in the Japanese release). Some conjecture this guide is the reason for the move toward the written and published in-house Ultimania series.

Each of the five main sections of the book are referred to as a "Volume". An English name for the volume is written in the margins of a page, while at the top of a page is the section name.

This section covers each job and their abilities.

The game covers the four chapters of the story. Each chapter has a map, character relationship diagram of things that go down in the chapter, a flowchart, and guide of the story events.

The English chapter names are not given in the guide.

This section covers all Items and Enemies, special enemy units, as well as miscellaneous other things including the Sound Novel.