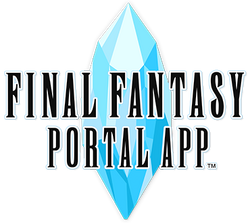 The app allows fans to keep updated with the newest information about the franchise.

By registering their Square Enix ID and engaging with the app, players can receive points that they can exchange for exclusive digital content. These Portal App points also contribute to monthly collection drives that yield extra loot for featured mobile games when specified goals have been met.

The Portal App also has an updated version of the Final Fantasy VIII minigame Triple Triad included, which can be played at any time by tapping its icon within the app. As in its original version, the Portal App version features cards with illustrations from characters throughout the franchise's history. The mini-game also shares some cards with the Final Fantasy XIV version of Triple Triad. As players progress and face stronger opponents with more complex rule sets, they may earn additional Portal App points to spend on goods.

The new Triple Triad game featuring cards of characters from the Final Fantasy series. This picture is from a test version as several cards shown here do not exist in the actual game.