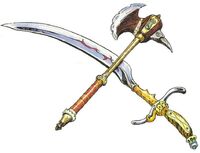 The following is a list of weapons in Final Fantasy Mystic Quest. Weapons are usually found, but can sometimes be bought from certain people. The player can cycle through their weapons at any time by pressing

, this can also be done during battle.

The attack strength of sword, axe, and claw weapons increases as the player levels up. Bomb type weapons have set attack power and they will not become stronger when Benjamin levels up.

The damage formula for physical attacks is:

Sword type weapons can be used to hit switches on the overhead map.

Axe-type weapons can be used to chop down trees on the overhead map, or can be used to hit switches, like those found in Pazuzu's Tower. All axes deal axe-elemental damage and deals extra damage to tree, crab, turtle and worm-type enemies.

Claw-type weapons can be used to climb up and down some walls on the overhead map and the Dragon Claw can also be used as a grappling hook to swing over large gaps.

Bomb-type weapons can be used to destroy obstacles on the overhead map, and the Mega Grenade can be thrown from a distance to destroy obstacles. Bombs have high power when Benjamin first acquires them, but they have set power and do not grow stronger when Benjamin levels up, lowering their effectiveness in later areas. They have limited ammo and additional ammo is sold in towns. Up to 99 bombs can be carried at once. All bombs deal bomb-elemental damage, dealing extra damage to slime and beholder-type enemies, and hit all enemies.

These weapons are used by Benjamin's allies and cannot be equipped by the player. Kaeli is not listed, as she uses the Axe and the Giant's Axe during her travels with the player. Bare Hands is only available to characters that have run out of ammo.

Benjamin thrusting the sword on the field.

Benjamin swinging the axe on the field.

Benjamin extending the Dragon Claw on the field. 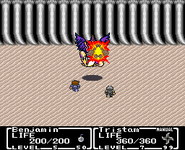 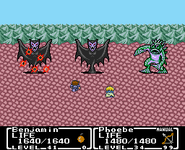