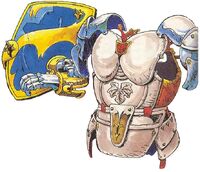 The following is a list of armor the player's character can wear in Final Fantasy Mystic Quest. Armor is usually found, but can sometimes be bought from certain people. Benjamin automatically equips new armor when it is acquired, as each armor piece has superior defenses to the prior piece with the same associated elemental and status protections, thus making the older armor inferior in every manner. Allies do not acquire new armor, though some of them have different armor when rejoining Benjamin at a later date.

NPC armor only used by Benjamin's allies and cannot be equipped by the player.

There are eight elemental defense and special defenses, some of these protections are on many pieces of armor/accessories that grant protection to one or many elements/statues listed below. Some icons never show up on the status screen since no armor/accessories offer those protections. Thus the player can never have their protection, unless they use a cheating device. 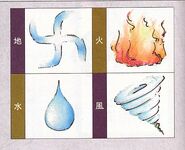 Four out of the eight elemental icons.