Everyone
USK: Free for all
ACB: G8+
PEGI:

Final Fantasy I & II: Dawn of Souls is a compilation of the first two games in the Final Fantasy series. It was released in Japan under the title Final Fantasy I • II Advance. Graphically, it is similar to the previously released enhanced remakes of both games for the WonderSwan Color.

Final Fantasy is about the journey of the four Warriors of Light as they set off to restore light to the four crystals whose power sustains their world.

Final Fantasy II is about three youths fighting against The Emperor of Palamecia, who is attempting to take over the world. In the beginning of the game, they are separated from one of their friends, Leon.

Both games were faithful in content to the original NES versions, and the package, while graphically similar to the WonderSwan Color adaptation of the first game, also contains the Bestiary feature, which allows the player to view images and statistics of enemies they have defeated in both games, which was first featured in the PlayStation package.

Dawn of Souls lacks the ability to choose between easy and normal difficulty, which was available in Final Fantasy Origins, although not in the original. Many reviewers complained the first game appeared to default to "easy", making the heroes level up much more easily and rendering enemies much easier to defeat, especially in comparison with the NES original. Many items are cheaper, the party begins with more money, and defeating enemies brings greater rewards. Others praised the reduced difficulty level, saying that the original NES title's high difficulty level (especially in comparison to later titles) was the game's primary weakness.

A number of other changes were introduced to the Game Boy Advance adaptations:

Final Fantasy also features four extra dungeons not available in any other editions, until the release of the 20th Anniversary Edition. These dungeons are accessible by collecting crystals that appear after defeating certain major opponents. In order of availability, the dungeons are the Earthgift Shrine, Hellfire Chasm, Lifespring Grotto and Whisperwind Cove.

Final Fantasy II includes a completely original feature, found in none of the other contemporary remakes; once completed, a bonus dungeon titled Soul of Rebirth would be accessible to the player, featuring a number of characters who had died during the course of the main story as they journey through the afterlife. 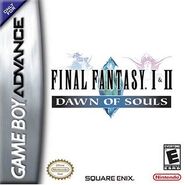 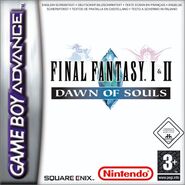