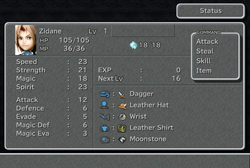 Gaining levels earns Magic Stones, allowing the character to equip more support abilities at once. Quina's level also boosts the damage they can do with Frog Drop.

A party member's HP (with no support abilities equipped) is determined as follows:

Enemies' HP affects fractional damage abilities and Quina's Eat/Cook. When Zidane's last HP digit is 7, he can use Lucky Seven.

The MP stat shows how many abilities a character can use. Most characters' skillset abilities, such as Skill, Blk Mag, Wht Mag and Swd Art, require MP to use. Party member MP is capped at 999 while enemies' are not.

The MP of Dagger and Eiko also determines whether or not an eidolon will do its full animation when summoned based on the following:

A party member's MP is determined as follows:

Enemies mostly use abilities for "free" and only the White/Black/Blue magics (as well as Aero and Aera) use MP. Enemies' MP costs are not the same as when a party member uses the same ability (enemies use less MP). Enemies also tend to have a lot of MP, making MP-removing strategies cumbersome of not inefficient.

The Speed stat determines the "length" of the Active Time Battle gauge of a unit fills up. While the visual length will not change, having a higher Speed stat makes a character get their next turn faster.

The length of the gauge is determined as such:

The gauge is filled by a fixed amount each tick, depending on the battle speed and whether the user has Haste or Slow:

Speed also determines the damage from Zidane's Thievery alongside his steal stats.

A party member's Speed is determined as follows:

in which Speed Bonus is increased by any equipment that boosts Speed that was equipped on level up (if equipment gives 3 extra Speed, then 3 will be added to the Speed Bonus on level up).[1]

However, this varies slightly depending on the weapon. For thief swords and knight swords, the bonus damage is also based on Spirit, while for rackets, the bonus damage is also based on Speed. For both forks and hammers, the damage calculated is still based on the Strength stat, but is modified more heavily by random chance, meaning it can either deal much more damage or much less.[2]

A party member's Strength is determined as follows:

Additional character abilities and enemy abilities may have their own damage formula.

The Magic stat determines (along with Level) the damage dealt (or amount healed) by a magical attack, referring to Blk Mag, Wht Mag, and Summon abilities.

The effect (damage dealt or health restored) of a magic spell (Blk, Wht, or Summon) is determined as follows:

This formula changes when a summon only does half its animation:

Some spells may have their own damage formula.

Most status magic also has its hit rate influenced by the magic stat:

A party member's Magic is determined as follows:

in which Magic Bonus is increased by any equipment that boosts Magic that was equipped on level up (if equipment gives 3 extra Magic, then 3 will be added to the Magic Bonus on level up) and automatically by 3 each level.[1]

The character's Magic stat also determines their MP growth; therefore, even characters who do not use Blk Mag, Wht Mag, or Summon have an utility for this stat. Steiner's Swd Mag, of Freya's Dragon skills, do not use their Magic stats.

Spirit affects many things in gameplay, many invisible to the player.

Spirit affects the amount of damage dealt with thief swords and knight swords.

Spirit affects the accuracy rate of Zidane's Steal command (although the effect is minor and bypassed when Bandit is equipped) and Vivi's Meteor spell, and affects the characters' counterattack and critical hit chances.

Doom and Gradual Petrify are worsened by high Spirit.

The duration in seconds of a status's effect can be determined by Time limit / Deduction per second.

For delayed effect statuses a secondary "hit" timer is established that acts as spacer between the addition or subtraction of Hit Points. The hit timer follows the same rate of deduction as the status's time limit. Venom is not a timed status and therefore is not removed until cured.

To derive a hits-to-Spirit formula from this information, each hit timer reset has the effect of an extra deduction from the duration timer. When less remains of the hit timer than can be wholly deducted from, that, too, must be accounted for. It is possible that neither will make a difference to how many hits the target will receive in most cases, but for the sake of technical accuracy, it means that two formulas are required.

If the hit timer is evenly divisible by the rate of deduction, this formula can be used to calculate how many hits will be given:

If the hit timer is not evenly divisible by the rate of deduction, the formula requires some extra steps:

How a character's Spirit value is determined[]

The SprBase values differ from character to character, but never change. The SprBonus is the only way the player can affect the Spirit growth and every level the bonus goes up by a rate that is worked out from the character's current stat increases. For example, if the character has equipment that gives 3 extra Spirit, then SprBonus will go up 3 every time they level up. In addition the SprBonus will go up by 1 per level. Zidane has the highest base Spirit of all characters, and Quina the lowest, but it is possible to max out everyone's Spirit to the highest possible value of 50.

Party members have their own Magic Stones, which allow them to equip support abilities.

A party member's Magic Stones is determined as follows:

in which Magic Stone Bonus is increased by 5 each level.[1]

Awarded after battle, EXP will increase a characters' level.

Awarded after battle, AP allow the character to learn abilities of their equipment (weapon, armor or add-on).

All tables assume that all characters: joined the party at level 1 (characters miss StatBonus growth if they gain levels outside of the party), didn't have any stat boosting equipment while leveling up, and that Marcus didn't level up at all while in the party (Eiko inherits his StatBonuses)

When calculating the HP growth and MP growth of each characters, the following HPMod and MPMod tables are called upon for determining the values at specific levels:[1]

The following lists the growth of characters' HP with no equipment modifiers:

The following lists the growth of characters' MP with no equipment modifiers:

The following lists the growth of characters' Speed with no equipment modifiers:

The following lists the growth of characters' Strength with no equipment modifiers:

The following lists the growth of characters' Magic with no equipment modifiers:

The following lists the growth of characters' Spirit with no equipment modifiers:

The following lists the growth of characters' Magic Stones with no equipment modifiers: