Players have the option of beginning with any game, including Final Fantasy IV -Interlude-. Final Fantasy IV is more in-line with the original version and does not have the features or extra story sequences from the DS release. It instead retains the bonus features of the Advance release, with the post-game dungeons and party swapping.

Other features include the option of switching between the original SNES music and the DS version's music. The game contains an image gallery with videos and artwork. The gallery also includes new, never-before-seen images.

Changes to the The After Years include separating Ceodore's tale from Kain's, which was how it was in the original mobile phone release. Ceodore's and Kain's original Challenge Dungeons are no longer merged. Exclusive to this version of The After Years is a post-game boss called Lost Babil, which can be fought if the player talks with Challengingway on the True Moon. It is composed of three boss fights, which the player must assemble three parties for. New enemies appear, one for each tale existing in that tale's Challenge Dungeon, which drop rare items including Megalixirs.

The European version comes in a special edition package that features a fold-out box and contains a selection of art cards, a PlayStation Portable screen cloth featuring Cecil and a DLC costume for Cecil in Dissidia 012 Final Fantasy, based on the original artwork for Final Fantasy IV. The special edition was available at pre-order and on launch. 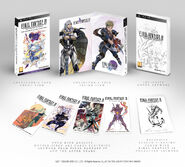 Tellah casting Bio in his battle with Golbez.

Tellah casting Meteor in his battle with Golbez.

The party battles the Magus sisters.

The party faces the Dad Bomb.

An airship in the Underworld.

Rydia casts Thundaga during a battle.

The battle against the Mom Bomb in The After Years.

Ceodore Harvey, Biggs and Wedge in the Adamant Isle.

A flashback of the cast meeting the newly born Ceodore.

The cast of characters in the opening FMV.