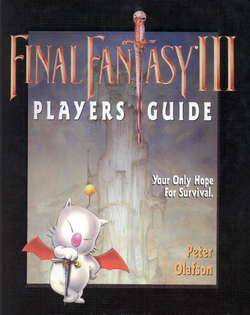 The guide is illustrated with screenshots from the game and with Yoshitaka Amano's artwork. The guide puts focus on discussing the story, and is favored more for its writing style than for its service as a gameplay guide. The guide is notable for being incomplete and incorrect, such as believing the only outcome of the fish minigame is Cid's death, and stating that 256 battles with the Cursed Ring turns it into a Hero Ring.[1][2]

The page numbering of this book uses Roman numerals 1 (i) to 21 (xxi) for the book's introduction, and uses 1-164 for the main portion of the guide.

Explains the approach of the book. It is one thing to simply tell a story. It is another to reveal the workings of a world. I've sought to do both here, As this book goes to press, I'm still finding thing I didn't know about., and And because it feels like a world, I've used real-world directions rather than TV-screen directions..

Introduction: The Story So Far, p.(xiii)

Retells and expands on the game's introductory scenes prior to entering Narshe proper.

This is not listed in the contents, or is counted as part of the "Introduction". Briefly mentions the characters, the basics of gameplay and how to play the game.

Each Part divides itself into sections for sub-sections of the game. Lists and charts appear throughout the guide, usually when they first become relevant: For example, the Tools chart appears after Edgar is introduced, and the Spells Chart after the first battle with Locke, Terra, and Edgar.

From the Raid on Narshe to the Battle for the Frozen Esper.

From losing Terra to the Opera.

From boarding the Blackjack to the Returners meeting in Narshe.

From the optional Lone Wolf event in Narshe to the Battle of Thamasa.

From Leo's grave to the escape from the Floating Continent.

From the timeskip to recovering the Falcon.

Mentions grinding strategies, the climbing of Cult of Kefka Tower (and the White Dragon), and the final dungeon Kefka's Tower (and the remaining two dragons) and the credits. The guide views the Statue of the Gods as an organic version of Kefka's tower.

The section shows the entire world maps and field areas (mostly the main external area of each location, sans-NPCs and chests) and captions them. The World of Ruin map is upside down. The guide also comes with correctly orientated annotated maps of the World of Balance and World of Ruin.