The following is a list of statuses in Final Fantasy Explorers.

Status ailments give their targets certain disadvantages in battle. Can be recovered with abilities, items, or over time.

Sends the target to sleep. Sleep stops the target's movement and increases the damage it takes. A physical attack will remove Sleep.

Reduces the accuracy of all attacks. Greatly lowers P-Accuracy and M-Accuracy.

Reverses the directions on the circle pad or stuns enemies. An attack will remove confuse.

Prevents use of Crystal Surges.

Inflicts damage over time and reduces P-Defence and M-Defense. Burn deals 80*8=640 damage to susceptible monsters and 20*8=160 damage to you.

Makes the target stop all movement.

Prevents all actions apart from movement.

Prevents all actions. End the effect earlier by moving the circle pad.

Prevents all actions. End the effect earlier by moving the circle pad.

Prevents all actions apart from movement and reduces movement speed.

Drops the target's HP to zero, KO'ing him or her.

Status enhancements give their targets certain advantages in battle. They can be canceled with abilities or one can wait for them to disappear. These status effects will be removed upon activation of the Bypass Buffs Crystal Surge.

Become untargetable by enemies. An attack will remove Invisibility.

Automatically revive after KO. Revive with 20% HP. Lasts until the character dies. 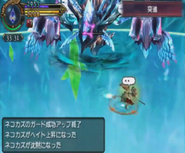