Louisoix Leveilleur: Eorzea was destroyed by a force of unimaginable power raining down from the sky. It is the dawn of a new age!
The following article covers a subject from a previous version of Final Fantasy Dimensions II that has since been removed.

The game ended its free-to-play service on October 31, 2017, citing difficulty with maintaining and delivering a product that would be to everyone's satisfaction. The company also stated that the free-to-play version would be removed from all stores by the end of November. Meanwhile, Square Enix released a standalone version of the game worldwide on the same day, retitling it Final Fantasy Dimensions II[1] (Final Fantasy Legends II: Toki no Suishō in Japan)[2][3].

Battle encounters are presented in rounds that start once the player enters a battle zone on the world map. Once a player enters a zone, they will have to fight a barrage of enemies until they reach the end. Entering a battle zone cost stamina points (AP). Players can choose to escape a battle if they find themselves overwhelmed by the enemies, however, any loot obtained during the battle will be forfeit. The loot will also be forfeit if they lose the battle.

The game uses a turn-based battle system, similar to the Conditional Turn-Based Battles used in Final Fantasy X. Only a maximum of three party members can fight in battle, with the character Mootie taking up a support role. In battle, Mootie will never take damage from enemies since it cannot be targeted.

In battle, party member commands are present on a dual-sided command ring, one side with the character's normal battle abilities and the other for summon special attacks. This allows the three members to have up to five actions on each side; a regular physical attack in the ring's middle and four abilities from summon stones equipped to the party members before entering a battle zone.

When summoning signets via the consumption meter in battles, the character's turn is not wasted while doing so. However, every signet can only be summoned once per battle. When they are summoned, they have the ability to either assist the party in various ways, including recovering a portion of all allies' HP or MP, or attack and delay enemies.

Battles once ran on a chain meter to determine the amount of rewards a player could select from chests after completing a battle zone. The meter lost points for taking actions from both the party and enemies, but players could raise the meter with crystals that dropped in battle by defeating enemies or by using a summon's special attack. This chain meter could reach a maximum of 4. However, In a update this function was removed.

Now, upon completing a round, the player will be taken to the treasure menu where they can choose four out of seven randomized chests. Additional chests can be opened if the player spent 30 space-time stones on individual chests.

Summons play a pivotal role in a character's stats and abilities. Abilities may only be used when equipped with a certain signet. In addition, character stats can only be increased by equipping weapons or accessories, or obtaining memory fragments and upgrading summon signets.

Space-Time Stones (STS) are the main in-game currency used. It is given to players for free in events (Monthly Raid events), storyline quests, daily rewards and missions. The in-game shop is split into two or more unique cash-shops that require different amounts of currency to use them.

Sometimes the game will give additional rewards for investing 3,000 stones on the cash shop, such as Babil points for use in Babil Tower, Ω Limit Drops, Pink Tails of the highest rank and so on.

Summons can be leveled and can be upgraded in rank after their signet has reached the max level. Upgrading signets require the player to have the summon fully leveled on its current rank. However, once a summon's signet is upgraded in rank, they revert to level 1 again and must be leveled up once more. All signets have a maximum rank of various stars, and the highest out of them is 8★.

When going into battles, Mootie's stats are determined by the average Strength, Magic, Speed, HP and MP of the active party members in the battle.

Whenever the player logs in into the game, they will receive a special item dependent on the day of the week. This item ranges from Space-time stones, AP vouchers, Babil points and cash shop vouchers.

AP functions as stamina, which is required to complete quests and enter any area. A single point of AP will regenerate every three minutes. Most battles or events require 5-20 AP to participate in. Upon leveling up, the player's max AP may increase by one, and will be completely recovered. AP is not required when fighting through the main scenario events or the Raid events. There is no in-game way to recover AP other than waiting, or using AP vouchers residing in the player's storage. However, by spending 100 Space-time stones, players are able to recover their lost AP.

Friends can give a percentage of their earned Yellow Vouchers for use in the Babil Tower from time to time, which makes it easy for them to stack if one didn't spend them in the Tower over a period of time.

Raid are community campaigns events, that require players to work together to defeat enemies. In these battles, players are given the opportunity to fight against powerful bosses. Players are able to obtain event limited signets and various rewards from participating in these events.

Missions are tasks that players can do in order to obtain various in-game items as rewards. Players can obtain limit droplets, space-time stones and big tails to upgrade their signets, and Babil points for usage in Babil Tower.

The Legends Caravan is a monthly event, where players can collect item points to exchange many valuable items.

The game was originally announced on November 19, 2014 under the title of Final Fantasy Legends: Toki no Suishō. It was directed by Takashi Tokita, one of the three directors of Squaresoft's 1995 hit, Chrono Trigger. The game is described as a story based on "magic that goes beyond time [and that] the characters will time travel as part of their adventures." The general director, Takashi Tokita, said the game aims to invoke nostalgia of SNES titles, like Final Fantasy V, Final Fantasy VI, and Chrono Trigger.

After a year and a half of service, on October 28, 2016, a teaser site was created for a mobile game, containing a countdown clock to a newly-revealed announcement and a single piece artwork of Chronos drawn by Yoshitaka Amano. In addition, the site included a note from game director of Legends II, Takashi Tokita, stating: "Final Fantasy is about characters overflowing with personality, dramatic battles about anger and sorrow, and more than anything, fantasy, which we mustn't forget."

On November 10, 2016, the update was released, renaming the game Final Fantasy Legends II. The original opening was replaced with a new opening containing a remixed version of Lia's "Timeless Tomorrow".

The game's character designs and illustrations are handled by CyDesignation, an art design firm founded and directed by former Square Enix artists Hideo Minaba, Ryosuke Aiba, Atsushi Kawasaki, and Akihiko Yoshida, many of whom did artwork for the game's signets personally. In addition, much of the artwork for signets are done by freelance internet artists including Kibannda Gohann, Sekishō, and Moryo. 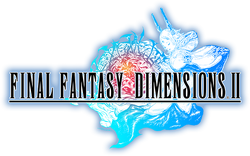 Only ten months after the relaunch under the title of Final Fantasy Legends II, Square-Enix announced in September 2017 that the game would cease services on October 28, 2017, citing difficulty with maintaining and delivering a product that would be to everyone's satisfaction. The company also stated that the game would later be released as a standalone premium version sometime after.

On October 25, 2017, a localization was finally announced for the game on Square-Enix's official Twitter and would be released under the name of Final Fantasy Dimensions II. 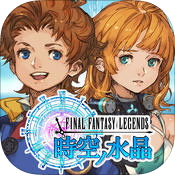 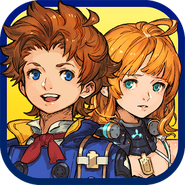 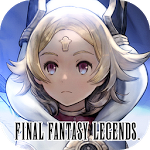 Artwork of the main characters (Original).

Fake speaking to the party.