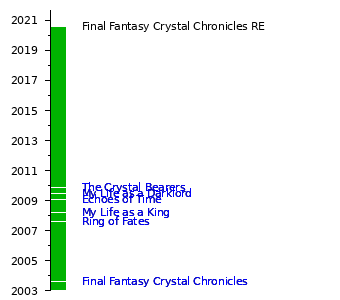 Two manga adaptations based on the series have also been made. Neither have seen an official release outside of Japan.

All games in the Crystal Chronicles series take place in the same world, though at different periods of time, as with the Ivalice Alliance project. One main aspect involves the four tribes of the Crystal Chronicles universe: Clavat, Selkie, Yuke, and Lilties, all with different physical aspects and unique traits. Another creature that commonly appears are the Carbuncles, based on the summon from the Final Fantasy series, Carbuncle.

The series also has several recurring characters. Stiltzkin, the traveling moogle, is the only character to appear in every installment to date. Lich has made a few appearances as both a character and a boss. There are also four recurring locations thus far; Kilanda Islands, Rebena Te Ra, River Belle Path, and Alfitaria.

In terms of gameplay, the Crystal Chronicles games differ greatly from the main Final Fantasy series, and are more action and multiplayer-based. There is also a recurring mini-game, Moogle Paint, where the player has the option of painting a moogle.

While Square Enix has stated that the Crystal Chronicles games take place in the same world, it has not been made clear how they are connected, though there have been a handful of hints.

Ring of Fates takes place during the Golden Age, where all the tribes lived in peace, and when the Great Crystal protected the people from the "malefic glow of the blood-red moon". Rebena Te Ra stands as an illustrious city and capital of the Age, a mingling place for all peoples. At some point during the following 8000 years, an age of prosperity was born when the Clavat scientist Larkeicus creates technology powered by special crystals dubbed Crystal Cores. Despite the initial prosperity, the Crystal Cores started to disappear from the world. Using the power of the crystals, Larkeicus saw a magical explosion in the future that was destroying Crystal Cores. He discovered a way to become truly immortal using the crystals, and spent those 2,000 years building a tower to locate and eliminate the source of the explosion. The woman Sherlotta, also rendered immortal by Larkeicus's experiments, ends up thwarting his plans and reveals that his own actions cause the Crystal Cores to die out.

The Golden Age is forcibly ended across the world when a meteor strikes and fragments fragments the Great Crystal, setting up the events of the original Crystal Chronicles. The meteor carried an alien lifeform dubbed the Meteor Parasite, which spreads poisonous miasma across the world. Monsters are immune, but towns, villages and other settlements throughout must be protected from the ill effects of miasma by fragments of the Great Crystal, which generate a barrier that miasma cannot penetrate. The crystals' effect last around a year before they must be recharged with the liquid myrrh obtained from "myrrh trees". Due to its close proximity to the Meteor's point of impact, Rebena Te Ra becomes a monster-filled ruin. The players, members of the the Tipa Caravan, eventually defeat the Meteor Parasite, ridding the world of miasma.

One thousand years after Crystal Chronicles, by the events of The Crystal Bearers, the balance of power has changed. In the intervening years, the Lilties and Yukes engage in a war that eventually results in the extinction of the Yukes when their tribe's Crystal is destroyed. Magic begins to disappear, and the world begins to run on mechanical technology powered by crystals, fragments of the shattered Yuke Crystal. During this time, the Crystal Bearers begin to emerge, as people with magically-infused crystal shards in their bodies, giving them powers. The story ends with the Yuke Crystal being restored, rescuing the balance between races and removing the powers from nearly all Crystal Bearers.

Though four games have been released, and two in current development as of May 2009, since the announcement of The Crystal Bearers, the game's release and details about the game are very scarce. The first new trailer since 2007 was released with the Wii version of Final Fantasy Crystal Chronicles: Echoes of Time in January 2009. In November 2008, in an issue of Electronic Gaming Monthly stated that the game had been "quietly cancelled", though Square Enix responded saying that they fully intend to release the game. Crystal Bearers was released on December 26th 2009.