Because the Wii Shop Channel is offline, My Life as a King and its downloadable content are no longer available.

The magic of Architek is powered by elementite, which must be gathered from the dungeons surrounding the kingdom. Because the player is in the role of a king, and is therefore too important to risk their life, certain residents can be hired as adventurers who will leave the safety of the kingdom to gather the elementite.

The player must also tend to the needs of their residents by building amenities such as a bakery to increase their happiness, or a weapons shop to better equip their adventurers.

The main character cannot go on missions, and instead sends off Adventurers from the Kingdom to complete these missions.

There are four job classes: 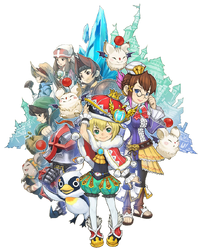 Set after the events of Final Fantasy Crystal Chronicles, My Life as a King revolves around King Leo, whose old homeland was destroyed by the Miasma. He is now attempting to rebuild the new land established by his father, using the power of "Architek" received from the crystal. The story is narrated from the point of view of the Chancellor in her reports.

The story about to unfold depicts one town's rebirth at the edge of a frontier.

After a long journey, the king and his two retainers finally reach upon a frontier land established by the young king's father many years ago. Only the castle and a radiant crystal remains as notable landmarks in the desolated town. After gazing upon the Crystal, it greets the little king and bestows him with the crystalline art of Architek, for it is its wish to restore the land.

After trying his new-found ability, the first house of the town is constructed; however, a surprised Clavat woman would appear from the house, revealing that she and her son were from the king's former homeland. The king use his new power to bring back more people from his former homeland, but when he is unable to build anymore, the crystal reveals to him that crystals known as Elementites need to be collected in order to create more buildings. As the king is to important for the sake of the kingdom, adventurers are commissioned to take on the mission to gather this material from the nearby dungeons; and so, the reconstruction of the kingdom begins.

However, one day, alarming news come from the adventurers. The monsters around the realm are getting more ferocious, even though the miasma has faded away. Rumors start to spread about a Dark Lord, who forced out those inhabiting the land when the king's father first established it. One night, the people are assembled around the Crystal, pondering on the possibility that the tragedy would befall once again to the realm. Then the Dark Lord himself appears before them, but he, to the surprise of everyone, is none other than King Epitav, who encourages the young king to keep constructing the realm. Chime says not to listen, that the king's father was not like that. After that, the Dark Lord disappears, leaving the town in distress.

Next morning, the king is seen preoccupied about the possibility of his father been the dreaded Dark Lord; however, Hugh Yurg shows up and tells him that the adventurers got together and decided that they will defeat the Dark Lord so everyone can be safe. Chime wonders why the Dark Lord wants the town built up if he had previously destroyed it. Yurg notes that, whatever may be the case, the only way to stand against him is to build up the city anyway.

One night, the wandering moogle Stiltzkin shows up. He happens to be rather close to Epitav, so the king invites him inside to see if he knows anything about his. As it happens, he ran into Epitav soon after the miasma cleared, and told him a story about architek:

At the edge of the world, a rock houses the heart of a king...
A corrupt crystal, bathed in drops of sorrow and remorse, will restore the days of old.
Homeland and people will be reunited before their king, who will be proclaimed archlord.

The Dark Lord shows up and Chime yells at him to take off the disguise. The Dark Lord complies, shedding the form of Epitav and revealing his true self. He asks the king why he wishes to stop him, as his goals are the realm's prosperity as well. When asked why, then, he destroyed the kingdom Epitav had built, he replies that Epitav was foolish and refused to accept him.

The kingdom once belonged to the Dark Lord where he tried to create a safe haven for monsters, but when the miasma cleared, his dream was destroyed. So he trapped his heart inside the crystal, waiting to be reunited with his body. Time passed and one day, King Epitav showed up. Having gained the power of Architek, he started rebuilding the town. One day, the Dark Lord appeared to him and offered him power and the title of archlord in exchange for freeing him from the crystal. Epitav refused to comply and the Dark Lord trapped him "where his heart rest".

The next day, the king and his court decided that King Epitav must surely still be alive and in the temple where the Dark Lord's heart rests. The king is reminded again that he is needed in town and cannot go rescue his father himself, but should rely on the adventurers he has commissioned.

Once the entrance to the Shrine of Awakening has been found, the king behests the subjugation of the Dark Lord and the rescue of his father that had imprisoned by him for a long time. Once the Dark Lord has been defeated, everyone goes to the gates to welcome the heroes, but the king feels a strange presence coming from the Crystal. The Dark Lord appear and tries to take the king to the world of the dead with him; however, after everyone attempt to protect the king he realize the little king has achieved something greater he never could: the heart of his people. The king finishes off the fading Dark Lord and, with his final words, recognizes Leo as the only one who has been worthy of the title of Archlord.

A new day breaks in and the people prepare for the coronation of a new king, as Lord Epitav abdicates the throne in favor of his son. The country takes its first steps into a brighter future.

My Life as a King features additional downloadable content which includes extra costumes, new buildings to construct, extra dungeons, and adventuring races to recruit. Additional content is priced between 100 and 800 Wii Points. Users who purchased and downloaded the game before April 1, 2008 were required to re-download an updated version of the game in order to access the new content.

Downloadable content is unlocked for all save files when purchased, and unique rewards obtained in dungeons unlocked by downloadable content, such as buildings for other races or sacred shrines, can be carried over when starting a game from clear save data.