The game is a sequel to Final Fantasy Crystal Chronicles: Ring of Fates, and serves as prequel for Final Fantasy Crystal Chronicles. It uses an enhanced version of the gameplay established in Ring of Fates, but also shows new features in the gameplay like the ability to swim in water. Some combat is featured while swimming too. Another new feature is that each Tribe is able to equip other Tribe specific weapons, although they can not use their tribe specific abilities without their tribe's main weapon, but later on gain level with other tribe's weapons.

DS and Wii users will be able to play together via Wi-Fi using an Engine created by Square Enix called the Pollux Engine. Mii characters have also been incorporated into the game as masks that can be put on characters. These Mii characters mask can also be used in the Nintendo DS version once players import them from the Nintendo Wii. DS users play with the stylus while Wii users play with the Wii remote. Single player and Multiplayer both play the same, with each mode having only little differences. Players can switch between both modes from a Save point.

Wii Version - The Wii version of the game contains all of the major elements of the DS version, but must be played on a single screen. To compensate, the Wii version has two adjustable in-game windows. Each window has a maximum size that is approximately 40% of the total screen which can make the text (on both the play and item windows) difficult to read, however players can use + (make the main screen larger, sub screen smaller) and—(make the sub-screen larger, main screen smaller) buttons on the Wii Remote to adjust the screen size, and pressing both + and—at the same time swaps the two screens. As a minor addition, the Wii version also contains a new trailer for the next Crystal Chronicles game titled The Crystal Bearers, and allows players to create masks based on their Mii which costs 5,000 gil.

DS Version - The game is still the same as its predecessor, Final Fantasy Crystal Chronicles: Ring of Fates, although with many updates and changes. The player still controls the characters through the arrow buttons and use interactive abilities (attacking, magic, or holding) through the A-B-X-Y buttons. The mecanism to hold items is removed, being only possible collect them. The DS version cannot host a Multiplayer game if there is a Wii being used to play cooperatively. 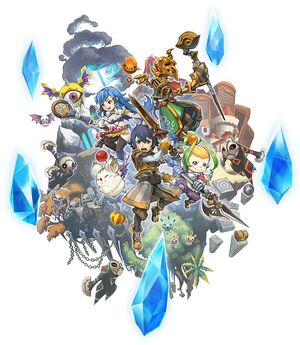 Players create their own playable character, choosing their characters tribe and gender. Appearances can be changed through different Headgear and Body Armor equipped. Hair color is also customizable (except for Yukes), though only by talking to Artemicion. While each tribe can use any weapon, only the tribe that specializes in a weapon type can gain access to that weapon type's full moveset.

The story starts with the Hero's dream: They see a young girl in a white gown running away from an old man. The girl trips and is caught by the man. He grabs her by the hair and the man sees a large crystal. The girl notices the crystal, and the man begins laughing. Then the crystal shines and the Hero wakes up.

This is their sixteenth birthday and Coming of Age ceremony, in which the Hero is required to set out in a forest for the crystal, whose with its leader: Sherlotta. When the Hero reaches a clearing in the forest, Sherlotta appears, floating on the Crystal, and she tells the Hero that they have passed the test. Sherlotta gives the Hero a Crystal. Soon after, even before the village has time to celebrate, a girl in the village named Eryll falls ill to a disease known as "crystal sickness". The Hero must leave the village to find a cure for Eryll and enter a world where crystals no longer exist. 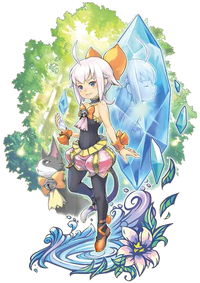 Arriving in the outside world the Hero visits the town and asks all of the townsfolk about the crystal sickness. None of them know anything regarding it and direct the Hero to the library. Inside the massive library they find Larkeicus, who says he knows the cure for crystal sickness, but needs a Buffasaur horn to complete the antidote. Leaving the library the Hero hears about the water being contaminated and some townsfolk suggesting that it might be a monster. The Hero asks them about it and is told the location of the Aqueducts.

After traveling through the area and killing a rare and powerful Buffasaur, collects its horn, and returns to the library. Larkeicus takes the horn, adds it to his concoction, and creates the antidote. The Hero returns to the village, with the antidote, and Eryll is cured. Then they return to the town to repay Larkeicus for his deed. The Hero is told to go up both Fire Mountain and Ice Mountain and activate the ruins there. After doing so the Hero returns home for a rest.

That night the ruins activate, and as Larkeicus stands at the Gate, two beams from the two mountain's ruins fire in to the sides of the gate, and a portal activates in the gateway. Then from the portal appears a massive Tower, and out of the gate appears monsters.

On the other side of the land in the Village, the Hero sleeps softly as Sherlotta silently watches, but when the beams pour in to the gate from the twin mountains. This causes the crystal core to crack and break. As the crystal core shatters, Sherlotta has a disorder in her body. As the cracks in the core increase, the more pain she experiences. Finally, the crystal core cracks.

In the morning, the Hero wakes to see a black and white cat, with an orange bow, stare at them then scamper off in the distance. Looking around the Hero finds the entire village deserted except for the Hero themself and the young Yuke, Norschtalen. Searching through the forest, they find only small fragments of the once large crystal. Eryll asks them to find the fragments of the crystal. The Hero talks to Norschtalen, and she says that the crystal in the forest was a Crystal Core. The Hero decides to find Larkeicus and ask him.

When the Hero finally finds Larkeicus, he tells of the ancient civilization, and wonders how the Hero got their crystal. As he speaks, he places three books on the floor. When he finishes, he snaps his fingers, and three red patterned monsters (Golems) appear. Then Larkeicus says the Hero performed their role, and must die. Then the Hero battles Larkeicus and wins. They shine their crystal, then it suddenly flies over and attaches itself to Larkeicus. He then is resurrected, and talks of him being immortal, and says that in a world without crystals, resurrecting himself has become difficult. Then he flinches, then takes the Hero's crystal and throws it away. Angry, he promises to kill the Hero. Then Larkeicus teleports away.

The Hero goes to find Norschtalen and she says to visit the ruins in the desert. In the ruins, the Hero finds a Yuke who battles the Hero as the boss due to a reaction with the Hero's crystal. He then reveals that he was a guinea pig in Larkeicus's experiments, making him immortal but also mentally unstable. After telling the Hero a bit about Larkeicus he gives them a crystal shard finder. 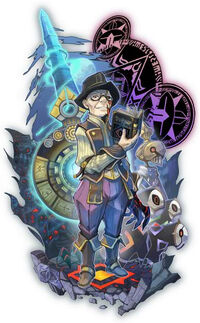 After returning with the first crystal shard, the Hero has a vision shown to them by the crystal of when the Hero was younger and developed crystal sickness. When the Hero leaves the forest they find that two of the villages have returned. The second time the Hero finds a crystal shard, they are shown when Sherlotta was setting up the boss battle for the Hero's graduation test (again, two of the villagers return), the third time they see Sherlotta naming the Hero (yet again, two of the villagers return), and the fourth time, when the Hero was first found in the forest by Sherlotta. The final time, nothing else is shown to the Hero, however the Crystal Core enters them and Eryll becomes a spirit, who runs through a new path in the Forest.

After fighting the coming-of-age boss again the Hero finds a ruined village where Sherlotta is standing. She tells the Hero that 2,000 years ago when all the crystals disappeared except for the one in the forest, Larkeicus came to take it, killing everyone but Sherlotta. She ran into the forest to the crystal with Larkeicus following and when they reached it, the crystal core fused with Sherlotta and gave her the ability to create other crystals (by tapping in to the crystal's power inside her. In Sherlotta's heart, presumably since when she summons crystals, her right hand is seen gently clutching her left chest), and made her immortal. As she talks, all the villagers that had been in the Hero's village walk up behind Sherlotta as spirits and Sherlotta tells the Hero that Larkeicus is trying to erase the current future.

At the end of the graveyard, Sherlotta finds the part, but awakes an unnamed ghost woman of an unknown race, which tells Sherlotta to leave the part. Sherlotta, of course, does not listen and the Hero's party go into battle with her. After defeating the Undead Princess, she is absorbed into the part, and the ghost effectively joins the party as a non-playable character. The Hero and Sherlotta go to the library, to find a clue about where the next part is. They find a book in the library that described how to get to a mine.

The Hero's party, and Sherlotta go to the gateway. Sherlotta then creates thousands of crystal and uses them to build a bridge to the Tower. When the Hero gets to the end of the bridge, they face the tower that Larkeicus built.

Once they have climbed the tower and get to the top, there is another Sherlotta as a child. Sherlotta then explains how that is not her, but a puppet controlled by Larkeicus, used for crystal making only. She then faces the Hero and tells them to kill her, because if she is not alive to make crystals, Larkeicus cannot revive himself after he is defeated. Larkeicus comes out and tells the Hero and Sherlotta that it will not be necessary, because once he is done with his actions up on the top of the tower, he won't need Sherlotta anymore. He tells them that he would even kill Sherlotta himself. The Hero's party goes into battle with him. Upon defeating him, he absorbs crystals from the actual Sherlotta. She once again falls to the floor because of the crystals being forced out of her heart.

Sherlotta lays there, her power drained. The Hero goes into a second battle with Larkeicus. Once defeated, he says to the Hero that they were taught well, but the efforts are in vain. Upon hearing this, Sherlotta (as a cat) charges Larkeicus, but is easily held back. Larkeicus absorbs whatever is left of her energy and throws her aside Sherlotta (the human), then comes up behind him and holds him in place. He is stunned, and Sherlotta explains how she loves the Hero, and that she would do anything for them. She then explains that she knows why the Crystal Core came to her on that day, 2,000 years ago. Her essence had created the crystal and that it was made specifically for the Hero.

A Crystal Core then appears in front of Sherlotta and Larkeicus, and starts to burn him and kill him. Sherlotta says that it is time to come back to their own age, and Larkeicus slowly disintegrates. Sherlotta then tells the hero goodbye, and that she has lived a long life, and would not give any of it up. 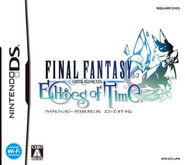 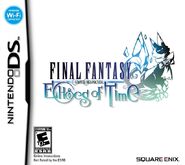 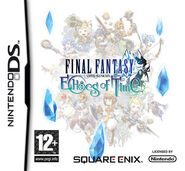