This Final Fantasy game features many new gameplay elements previously unseen in Final Fantasy, like real time fighting, as well as being the first RPG to incorporate GameCube-Game Boy Advance compatibility. The music was scored by Kumi Tanioka.

A remastered edition was originally scheduled for release on PlayStation 4, Nintendo Switch, and major mobile platforms on January 23, 2020[2][3], but is currently set for Summer 2020, citing a desire to deliver a complete product to fans.[1] It will be a digital-only release in North America.[4]

The game can be broken down into three general actions that players are able to choose from: exploration, interaction, and fighting. Like many RPGs, these will constitute the bulk of the game.

In Final Fantasy Crystal Chronicles, players assume the role of various characters who must venture out into the wilderness in a caravan to protect their village from a poisonous gas cloud known as the Miasma that engulfs the entire world. They must find magical trees called Myrrh trees out in the wilderness.

These trees produce one droplet of Myrrh every two game years, meaning the caravans must explore more of the world to replenish their supply of myrrh. Three droplets are needed every year to purify the town's crystal, which wards off miasma. The trees are guarded by a host of creatures bent on killing the caravanners. The passage of time plays an important role in the game, for as the years progress the challenges the players face grow increasingly stronger. 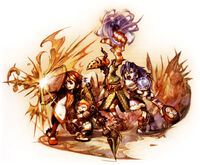 Like the other games in the Final Fantasy series, the story includes characters traveling across the world to accomplish some world-saving event by completing other quests along the way which furthers their progress. On their journey, events unfold which change what abilities the players have, where they are able to explore, and ultimately what they can do in the game.

While in the World Map, the player views a graph of the area they are in with their current location marked by a caravan. The player can travel along plotted roads from one town or dungeon to another, occasionally being stopped to view a brief cut scene. Cutscenes often add to the story or change items from the player's inventory, but they can also be mundane clips of interacting with another caravan along their path.

While in a town or dungeon the camera switches to a third-person perspective, following the crystal chalice in dungeons or the players themselves in towns, viewing them from above as they move throughout the stage. This can cause problems should the chalice be left in a location without anyone carrying it as the player can move off screen. In multiplayer games, players are restricted to being a certain distance from one another in towns, but they can still run out of view in dungeon stages. In towns or other urban environments, NPCs will talk to the characters, offer them advice, or sell them items by pressing the B button, while dungeons allows for different commands (attacking, casting magic, using items, etc.) by switching the options with R or L and confirming the command with A.

Combat in Final Fantasy Crystal Chronicles is real-time based and takes place in the regular movement mode unlike many games in the Final Fantasy series which use a turn based combat system or active time battle combat system. The player has free movement in the stage and acts in real time depending on the option selected. Combat is comprised mostly of physical attacks or magic spells.

Attack is permanently a part of the player's ability slots, along with Defend. Using this command swings the player's weapon once. Pressing A with correct timing multiple times in a row will cause a three hit combo faster than three individual attacks. Holding the A button down will have the caravanner start charging a focus attack, which has a special effect depending on the weapon used.

In order to cast a spell, a magicite orb or magic ring must be assigned to an ability slot. Holding the A button charges the spell, then releasing the button will cast the spell wherever the casting circle is at the time. Overlapping casting circles or combining a casting circle with a focus attack will result in a stronger fusion of the two. In a single player game, this fusion is possible by placing the necessary items in order in the ability screen or combining with Mog's spells which he uses randomly based on how far the player is from him and whether Mog is moving or not. 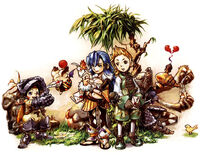 At the end of each dungeon lies a myrrh tree and a selection of prizes. These prizes, called "artifacts", permanently increase one stat (strength, defense, or magic) by a certain amount or maximum health points or number of activity slots by one or be able to cast a specific spell without magicite. In addition, artifacts encountered inside the dungeon temporarily increase the stat the artifact controls until the player exits the dungeon. Notably, in this game, spells and skills are not learned- special items called magicite must be acquired once per level to cast specific spells.

The story unfolds as the players journey from territory to territory, talking with people and completing quests set before them. While traveling, a caravan may encounter other travelers, which is displayed in cutscene. These movie-like breaks in the game further enhance the story and can be random or part of the storyline. Each encounter is recorded in the caravans journal and is recorded as a memory. By piecing memories together, the player learns the history of the world, nature of the miasmas, or subplots of the game, depending on what they have seen.

One interesting role-playing aspect of Final Fantasy Crystal Chronicles, is that the players can and should interact with their in-game parents. The players actually choose the occupation of their parents at the start of the game, and based upon this occupation the parents will aid the players in various ways. Blacksmith parents, for example, will forge new equipment for the players, merchant parents will sell rare items, alchemist parents can create designs for new equipment, and so on.

Additionally, players will have opportunities at the end of each dungeon to write home or send gifts to their parents. Players with good relationships with their parents are more likely to receive gifts from them in return, as well as gain discounts on their wares.

There are four Tribes (character classes) that players can choose from, each with its own unique strengths. A well-balanced party will draw upon the strengths of each race, which makes the game ideal to play with four players.

The four Tribes are:

The story of Final Fantasy Crystal Chronicles is highly non-linear, though there are certain quests which require the player to perform in a particular order to proceed. The main story itself is followed through several in game years.

The game takes place in a world covered in a poisonous gas called Miasma. Settlements have gathered around large crystals which ward off the mist and protects the people from danger. In order to preserve the crystals' radiance, the towns send out caravans to collect three drops of Myrrh to purify the crystal. Myrrh collects in myrrh trees, often guarded by monsters, every two years in their Crystal Chalice.

In the very beginning of the game, a caravan sets out from the town of Tipa to collect myrrh for their town. The myrrh is used at the end of the year in a purification ceremony to keep them safe for another year. After leaving home, the caravan meets a Lilty named Sol Racht and a moogle named Stiltzkin who offer advice on traveling in a caravan.

Each year the caravan is told a story by the village elder, Roland, about a young man who journeyed around the world trying to find a way to rid the world of Miasma and end the people's reliance on myrrh and crystals to protect them from monsters.

The caravan ventures out into the wild to collect the precious myrrh every year, running into other caravans from neighboring towns doing the same thing. Eventually the caravan meets a Lilty donning black armor and swinging his lance wildly called the Black Knight. He screams violently that a light has stolen his memories and thus he cannot remember who he is.

Later in their journey, the caravan encounters an eccentric Clavat poet named Gurdy. Over the years he is repeatedly abandoned by whichever group of people he's most recently deceived. Upon these encounters, Gurdy recites a short and mysterious rhyme before leaving the party. Occasionally the caravan will meet an eerily similar Clavat named Hurdy, claiming to be Gurdy's brother who he has never met.

Years after they originally left their homes for the first time, the journeyers, trekking across the ocean and deep into the Lynari Desert, are able to transform their crystal chalice's aura into an unknown element able to break the barrier of any Miasma Stream, including the mysterious cave beyond Rebena Plains. On the other side, the caravan finds themselves in Mag Mell, the home of the Carbuncles at the base of Mount Vellenge. After navigating the labyrinth of the mountain, the party finds a hideous creature emitting miasma from its body, the Meteor Parasite.

Before they can destroy the parasite, they are transported to a calmer setting by Lady Mio, the very light which the Black Knight was chasing. She tells the Tipa Caravanners that she and Raem feed on memories, but with one significant difference: while she nibbles on a memory from time to time, Raem enjoys devouring mass amounts of bad memories.

he also tells of a couple of adventurers, a Lilty named Leon and a Clavat named Hurdy, who attempted to do what the caravanners are doing now Mio explains that they were unsuccessful and lost their memories after the experience, revealing that the Black Knight and Gurdy are the travelers from Roland's story. Losing their memories caused the Black Knight to go mad, never to return home, and Gurdy to develop the alternate personality Hurdy under the guise of his own brother.

Raem then appears and explains that memories of bad experiences are his favorite to consume, and thus he lives in a special synergy with the Meteor Parasite which creates the miasma and causes so much of the pain Raem enjoys. He attempts to defeat the caravan to perpetuate the miasma and consequently satisfy his need for nightmares. After a lengthy battle, Raem acknowledges his end is near and merges with Lady Mio, forming Memiroa. He again attacks the party, refusing to fade away from existence. In this mysterious plane the caravanners use the memories of their lives to fuel their vigor and finally destroy Raem once and for all.

The party is immediately transported back to the Meteor Parasite, withering and dying. After terminating the beast, a beam of light breaks through the miasma and dissipates it. The world is finally rid of the poisonous gas which caused so much pain. Mio's voice comes to them, explaining that she and Raem will sleep for a while. The warriors return home and finally are able to live their lives peacefully.

The most unique aspect of Final Fantasy Crystal Chronicles is that up to four players can play at once utilizing a Game Boy Advance connected to the GameCube (or Wii) via a Nintendo GameCube - Game Boy Advance cable. When more than one player wishes to play the game, each player is required to play with a GBA.

Due to the success of Final Fantasy Crystal Chronicles, the game has spawned three sequels and two prequels: