iOS, Android, Fire OS
Final Fantasy Brave Exvius is a free-to-play role-playing game developed by A-Lim and published by Square Enix for iOS and Android devices. The story follows the journey of Rain, Lasswell and Fina in their battle to protect the great crystals of Lapis. Thanks to the power of visions, it features characters that have appeared in previous games in the series, such as Cecil Harvey, Shadow and Exdeath.

The game marks as the first collaborative effort between Square Enix and A-Lim and draws elements from A-Lim's previous game, Brave Frontier. It was released first in Japan in October 22, 2015. The global version soft-launched in May 12, 2016 in several countries before being released officially in June 29, 2016. The global version of the game is maintained by a Singapore subsidiary of A-Lim's parent company, gumi.

On September 8, 2017, Square Enix released a spin-off game named Final Fantasy Brave Exvius Tap! for Facebook.[1] Due to low interest, Tap! has been removed from the platform as of mid-2019.

On December 2, 2018 Square Enix announced another spin-off game based on Brave Exvius called War of the Visions: Final Fantasy Brave Exvius, which is a tactical RPG.

The world map is presented as a series of fixed contact points, with a fixed set of dungeons (battles) located in each area. The player must fight through all of the battles in a given stage, expending associated energy per round, to unlock and advance to the next stage. Clearing all required dungeons will advance the story to the next waypoint, and gives a one-time reward of 100 Lapis (the game's premium currency).

Towns may be freely explored and dungeons that are already cleared can be replayed if desired. In "explorations", the player can traverse a given area for treasure and other items, but will also encounter random monsters. Entrances and exit points are marked on each area map: yellow for individual rooms and stairs, green for the entrance, and red for the exit.

The game uses a turn-based combat chain system that is thus far unique among series titles. This is attributed to the A-Lim company's involvement, as a similar chaining system is implemented in their game, Brave Frontier. The player may select a party of up to five units and a companion unit (or "friend") to deploy in battle, each with his or her own unique skill sets. When in battle, the player can select actions for the units to perform by swiping the units' panels in different directions. With an action selected, tapping a unit's panel will immediately execute the chosen action.

To set a battle command, the player can bring up a command window depending on the direction flicked:

The player is also allowed to strike multiple targets in the same turn, targeting the enemy by tapping on them. (Party members can be targeted by holding tap to a desired unit and, once a detail window pops up, by tapping "Target" button.) Enemies can do the same during their turns, so preparing a strategy turn-to-turn is critical to success. The same goes for unit selection: According to their skill set, units perform one or more roles in battle—Physical Damage, Magic Damage, Hybrid Damage, Tank, Healing, Support—and must be carefully selected as the player accesses harder content.

Chaining can be achieved by tapping panels in quick succession, and combining the units' attacks. There are two types of chains: Spark Chains (attacking with multiple units at exactly the same time) and Element Chain (attacking with multiple units using attacks of the same element). It is important to note that since every character's attack animation speed is different as well as the number of hits involved, timing when each unit should strike is crucial to chaining accurately. With proper equipment and specialized chaining partners (two or more units that chain adequately or perfectly), the player can deal up to millions of damage under the right conditions.

Winning a battle does not have immediate rewards as in typical Final Fantasy games. Instead, all materials collected and experience points gained are tallied at the end of a story battle round, or at the end of an expedition.

At the Home screen, the Dimensional Vortex (which in truth, is located at the Farplane) offers different features for players. Following the update to Version 2.3.0, it is categorized in three different tabs: Event, Enhance and Nemeses. In the Event tab periodically appear events (usually with a two-week duration), which allow the player acquire rare items and improve their units's development. There are several types of events, though the most common are those sponsored by King Mog and the collaborative raids.

The Enhance tab contains four different chamber, with a fifth added every weekends, which the player can battle through to obtain gil, experience points, crafting materials or awakening materials, and occasionally, utility units to be used to enhance units. Every day, one Chamber of the player's choice can be opened at no cost, while unlocking others during the same day requires 100 Lapis per dungeon.

Finally, the Nemeses tab contains the Chamber of the Fallen, containing a series of single-level dungeons with very powerful bosses called trials, which can be challenged at the player's discretion. Rewards such as high-end equipment can be obtained for defeating these bosses the first time. It also allows easy access to the Chamber of Arms, where endgame "10-man trials" (which work with the Swap Battle mechanics) take place. Training the Soul, to be completed with story units only, is also available.

By using arena/colosseum orbs which are refilled every hour, the player can access the Arena and the Colosseum. At the Arena, the player fights against AI controlled units of other players and accumulate points by winning against them. Consecutive wins increases the amount of points one receives. These points are used in a weekly and monthly leaderboard, giving better rewards the higher one ranks. Whereas the Colosseum is a mode that pitches the player against different monsters. Both the Arena and the Colosseum have several limitations for the player: consumable items, Lapis continues and friend units cannot be used.

Expeditions is a mode that allows units to be sent on expeditions, which must be funded with gil and party of up to five units, to bring back treasure. Each expedition lasts for a specified period of time, the maximum being a entire day, and up to four expeditions may be running at the same time. Each expedition is ranked by difficulty (the lowest being D-rank and the highest being S-rank), with higher ranks requiring a higher number of more powerful units to complete. Each expedition has a different bonus requirement, and units that meet its requirement will gain a higher success rate.

The game's story follows the main cast, whose units are acquired by the player as they progress through the narrative. However, these units do not need to be used at all to complete the story and the player can summon a myriad of miscellaneous units (original to the game's lore or lifted from other games in the series) to build their parties.

Visions—Storied heroes whose dreams transcend even death
Lapis—A world of crystals and the visions within
By the light of the crystals, a realm flourished. But now, a shadow falls...
Their world on the edge of ruin, two knights set out to drive back the shadows...
Let a new tale of crystals and heroes begin!
Crystals, heroes and high adventure
As legendary warriors join forces across time and space
Are you the hero of light we seek?

Pre-registration trailer for the global release.

The soundtrack of Final Fantasy Brave Exvius is primarily composed by Noriyasu Agematsu from the group Elements Garden, who previously worked on Chaos Rings for Square Enix. He wanted to preserve the nuances of the music from Final Fantasy III and VI, even while recording with a full orchestra. Agematsu is also known for having contributed some of the music for Wild Arms 5 and Wild Arms XF of the Wild Arms series.

For events based on other games in the series or outside the series, it features original music from those releases. For example, in the first Final Fantasy XV King Mog event, it used the themes "Daemons" and "Horrors of the Night", and during the collaboration with NieR Automata, "Bipolar Nightmare (Vocals)" was featured. The game also borrows some music tracks whenever it directly homages scenes from previous games in the series, as seen in some key scenes involving the Water Priestess Luka, in which the original NES version of "Priestess Aria" is played.

The English version was soft-launched on Swedish app stores for iOS & Android on May 11, 2016.[5] It was released to all mobile device app stores on June 29, 2016. As of March 2018, the global version has surpassed 30 million unique installs.

On May 16, 2016, Square Enix launched a massive registration drive[6] for the global game, offering in-game rewards to players who participated. With over 10 million Crystal Points earned during the campaign, the first five rewards tiers and one bonus rewards tier were available to all players until July 17, 2016.

Due to the status of loot crates in Belgium, Brave Exvius was withdrawn from all app stores In the country as of December 3, 2018. 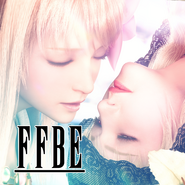 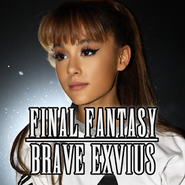 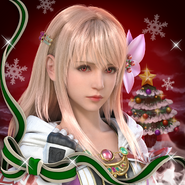 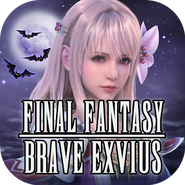 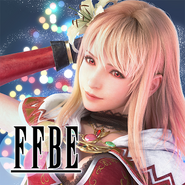 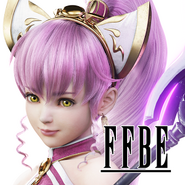 Artwork of Fina, Rain and Lasswell by Yoshitaka Amano

Brave Exvius has played host to well over two dozen collabs in its first two years of service, more than any other mobile title or MMO within the series.