Relm: I couldn't miss the chance to practice my drawing!
This article is in need of a few pictures. Perhaps you can help by uploading a picture of a current Japanese logo image.

The North American version officially ended its service on December 1, 2014. Service for the Japanese version ended per customary closure protocol on March 31, 2020.

Players control their individual character, choosing their gender and initial job. The character's job does not directly affect stats in combat; instead, each job has a bonus to either one or two types of abilities (those derived from STR, AGI, or INT), depending on whether the job is an initial job, a special job, or an advanced job. Special jobs are unlocked by either completing certain tasks and possess only one type of ability specialty, whereas advanced jobs are attained by leveling two jobs up to a certain level and possess specialization in two types of ability. Each job also gets a bonus to two different classes of weapon, gaining a bonus to one initially and unlocking the other bonus at job level 10. The character's job may be changed at any time through the menu where players may also equip their character with weapons, abilities, and summon stones.

The player may equip their character with abilities and weapons, each possessing its own Attack and Defense values. The attack value of a piece of equipment increases damage dealt to the target, and the defense increases the character's overall HP. A character may only equip one "main" ability and weapon, which are the methods of attack he or she may use in battle; however, characters may also equip up to nine additional abilities and weapons. These pieces do not directly aid the character in combat, and instead contribute to his or her Attack and Defense total. A player is limited in how much equipment he or she can place on their character by the Cost value of each item; the total Cost of items equipped must not exceed the character's maximum Cost value for each type of equipment, limiting options.

Summon stones are a unique type of equipment in that they do not possess Attack, Defense, or Cost values, and only five of them may be equipped at one time. Summon stones each have a Bravery stat and a Charge meter. The summon's Bravery affects its damage, and the charge gauge is what allows a summon to attack. Summons may only attack when their charge gauge is filled, and this gauge increases by fighting battles with creatures in Brigade mode.

There are two main types of combat activities the player may engage in, located in the Quest and Brigade sections. When questing, the player chooses an area, with the default being the most recently found area, and the character progresses along the screen from left to right as the player presses the Advance button. Each time the player advances LP is subtracted from the player's total, with the amount subtracted depending on the area. LP gradually recharges, the player regaining one LP per three minutes without the use of items. Each time the player explores they gain experience towards their overall level, which increases the player's max LP and their maximum Cost for equipment in addition to restoring their LP and BP to full. The progress gauge is also increased by exploration by a set amount. When the gauge reaches the maximum, the player has fully explored the area and may move on to the next.

Additionally, each time the player advances, they encounter either a monster, a chocobo, or a Gate Crystal. When the player encounters a monster, they are automatically defeated, the player only earning progress and experience from the encounter. The player may encounter anywhere from one to three chocobos when they are found, and they may be fed Gysahl Greens to entice them to give the character a crystal from a pouch around their neck, granting the character an ability. There are six varieties of chocobo: yellow, black, white, red, green, and gold. Black, white, and red chocobos give increasingly better quality rewards, but they more often run away when fed only Gysahl Greens. These chocobos will always give the player an ability crystal when fed vomp carrots, however, requiring one vomp carrot per ability obtained if more than one chocobo has gathered. Green chocobos will give summon stones. Gold chocobos only appear as part of a group of eight green or red chocobos, but will give powerful event abilities or summons when satisfied along with their seven cohorts. When the character encounters a Gate Crystal, the player can open a portal to the realm of Espers and trigger a Brigade battle with the creature found inside.

There are seven areas to any single location the character may quest in, and areas three and seven of each area contain bosses that must be fought to proceed to the next area. This battle takes place in much the same way Brigade battles do, with the player and the enemy each given a certain number of turns to attack and defeat their foe. Bosses are generally weaker than Brigade enemies, however, to compensate for the fact they must be defeated by one attack.

In the Brigade section of the menu, brigades battle Espers and monsters whose appearances are triggered by a player finding a Gate Crystal in either the character's brigade or their rival brigade. Once this has occurred, the two brigades each battle the creature, competing to deal the most damage to the creature. A player may spend BP in order to confront the creature in battle; players may possess a maximum of 3 BP at any time, and players may spend either 1 or 3 BP in each conflict with the enemy. The player may use 1 BP to deal small doses of damage to the enemy, or 3 BP to engage in an all-out attack, dealing more damage than even three uses of a 1 BP attack would and activating a summon stone if fully charged.

Any battle with a Brigade enemy lasts a certain number of turns, and the player and the enemy attack each other without prompt from the player. The player and up to two of their fellow brigadiers attack the enemy while the enemy fights back. Damage dealt to the enemy will carry over to any other player's next battle with the enemy, and the damage they deal will carry over as well, but any brigadiers wounded or forced to retreat by the enemy will be fully recovered at battle's end. When a battle is concluded, the player that fought will earn gil, commendation points, job EXP towards their current job, and a chest.

Every brigade and brigadier is ranked by the number of commendation points they earn by fighting enemies from the Esper Realm. Every day at 10:00 PM PST the two rival brigades are judged for their performance; the brigade that performed better that day will earn a platinum chest for every member, and the brigade that performed poorer will earn a copper chest for each member. An individual player will periodically receive chests as their individual contribution points reach certain thresholds. Additionally, every Sunday at 10:00 PM PST, brigades are reset; at this time, high-scoring brigades and brigadiers will earn additional chests as rewards, depending on their rank. The brigades are shuffled into different organizations, and only individuals in the same party are guaranteed to remain together when new brigades are formed.

A long time ago the country was protected by two crystals. One shattered and was scattered across the world, resulting in a monster invasion, while the other lost its shine. Only the ancient Espers can make the crystals glow again with their original shine, and so it's up to the player to travel to the world below on their airship and prove themselves in front of the summons.

There are two main divisions of jobs: Basic Jobs and Advanced Jobs. Basic Jobs are further divided between starting jobs and unlockable jobs, which have no official differentiation in nomination. The Basic Jobs the player start with are the six classic Final Fantasy starting jobs: Warrior, Monk, Thief, Black Mage, White Mage, and Red Mage. The player can also unlock jobs as they complete new areas. Reaching 100% in each region unlocks a different job. Meanwhile, Advanced Jobs are unlocked by leveling other jobs, some of which are Advanced Jobs themselves.

Basic Jobs give a bonus to one type of ability, and Advanced Jobs give a bonus to two. Each job also has a weapon preference that receives a bonus as well; and another, hidden secondary weapon preference when the job reaches level 10. Note the secondary bonus may not be in effect yet in the North American version, because they don't seem to be showing up in-game at all. More information can be found on the Jobs page.

Legends' summon stones are obtained through events and other special methods such as inviting friends to the game. Unlike normal summons that are usually ranked R or R+, the Legends are ranked SR and higher.

There are three categories of items in the game outside of weapons, abilities, and summon stones, all three of which are consumables: Recovery, Feed, and Evolve. For more detailed descriptions of what items do, see the Items page.

There are occasional events, each one based on a previous Final Fantasy game. The events happen every once in a while in the Japanese version, but very frequently in the North American version. Some events may also coincide with international holidays, and most will introduce a new gameplay mechanic. 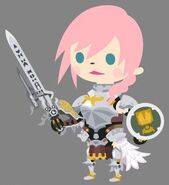 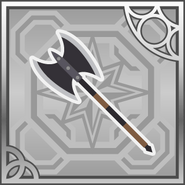