Mobile phones
Final Fantasy Agito was a free-to-play video game for iOS and Android platforms and is a follow-up to Final Fantasy Type-0. The game was a legitimate entry in the Fabula Nova Crystallis: Final Fantasy series, and Hajime Tabata and Takeharu Ishimoto returned as producer and composer respectively.[3][4] On June 10, 2014, a localization was announced alongside the release of Final Fantasy Type-0 HD,[5] but this never materialized.

The game ended service on November 30, 2015, but Square Enix said they would announce a "reborn" version during Tokyo Game Show.[6] The new version was revealed on September 18, 2015 as Final Fantasy Type-0 Online and later as Final Fantasy Awakening, which was set to be released for mobile devices and PC in Japan in 2016.

Players begin by customizing their character, choosing their appearance and weapon before starting off as a Class Twelfth student in Akademeia. The player is accompanied by a moogle and can ride chocobos later. The player can interact with various NPC students and teachers. The player can also develop bonds by playing minigames and conversing with the members of Class Zero from the previous game, excluding Machina Kunagiri and Rem Tokimiya. The game is divided into single-player missions, while the final part of each installment involve multiplayer sections where players take on bosses. After each encounter, their performance across the installment is ranked and they are promoted to a new class accordingly.[7]

Combat is based around the Active Time Battle system, utilizing turn-based mechanics and an action gauge which charges after each action. Combat is automated and players can issue actions by touching the screen. Actions, involving both physical and magical attacks, can be arranged into chains to execute combos, although each one takes time to cool down before it can be used again. Battles consist of a number of turns wherein players eliminate a select group of enemies. Members of Class Zero can be obtained and summoned once per battle for a short duration of time. The Killsight instant death ability also returns, where a carefully timed action enabling the character to kill an enemy with a single blow. The speed of in-game battles can be adjusted to suit individual players.[7] A core part of the system as a whole is a job system, whereby the player character can be assigned different jobs, which change their abilities accordingly.[8]

The game will be released in installments similar to Final Fantasy Dimensions, and players will be presented with choices that will influence the story of the next installment. While the core game is confirmed to be free, players have the option to pay for items, such as healing potions.[9][4][10][8]

The game is set in the country of Orience during the first cycle in the spiral of history, although not officially described as a prequel to Final Fantasy Type-0.[11] The developers have stated that the history of Agito changes in the middle and becomes different than Type-0 making it an alternate spiral of history with the same settings, so players are directed to the history were the Agito is born.[10] The player takes control of a customized character educated in Akademeia, joining characters from Final Fantasy Type-0, albeit they are in different classes. New characters Miyu Kagirohi, Lean Hampelmann and Tono Mahoroha were introduced but little is known about them. The story is set to alter with player choices. It is planned to lead to a different conclusion than Final Fantasy Type-0 cementing its status as a parallel companion game.[12][10] The release of chapters began in May 2014 and is planned to conclude in August to September.[10]

The playable cast of Final Fantasy Type-0 appears, but aside from Ace, they have been reassigned to different classes.[13][14]

The idea for Final Fantasy Agito originated with the early origins of Final Fantasy Type-0, meant to be a mobile game called Final Fantasy Agito XIII. Even after the game's platform and name changed, Hajime Tabata liked the 'Agito' title, and decided to return to his original concept, deciding to use the player-choice mechanic the original would have boasted.[15] In an interview, Tabata said he considered Type-0 as the prototype for Agito.[11]

In contrast to the original's dark and brutal story and atmosphere, Agito is intended to be lighter in tone, as reflected in the game's music, although serious moments are also incorporated.[7] The first hint of the existence of Final Fantasy Agito came in April 2013, when Square Enix trademarked the name. While this was nothing new in terms of the company's operating procedure, it did incite speculation.[3] The game's official announcement came later when Square Enix released details about the game in the September issue of Famitsu.[16] Those who pre-registered online could get special street clothes to wear, while those who purchased the final volume of Final Fantasy Type-0: The Ice Reaper acquire a code for outfits inspired by the character Kurasame Susaya.[17]

Thinking that it would please the core fans Final Fantasy Agito was released as a smartphone title, but it is very easy to play and most of the players are newcomers. The team decided to also develop the game for PS Vita because before distributing the smartphone version, there was demand by the core fans asking for Agito on Vita in Square Enix's player surveys.[18]

The content between the smartphone and Vita versions was to be the same, but the player could operate the PS Vita version with the device buttons making the action aspect more enjoyable. Many people who play the smartphone version do it in their free time, but the PS Vita version could be played for longer periods of time, and Square Enix planned to make updates that met each new need, progressing in a way that can respond flexibly to how players play. As Final Fantasy Agito on its own is a free to play game, the packaged version would come with various perks.[18]

A PlayStation Vita version named Final Fantasy Agito+ was announced to be released later. Square Enix later announced that the port was delayed. Originally scheduled for release on January 15, 2015, the release date was changed to 'TBA'. The stated reason was that technical issues were found in the game that required attention. The company apologized for the delay, and assured fans they were using the delay to improve the overall quality of the game.[19] On September 17, 2015, Square Enix announced the cancellation of Final Fantasy Agito+ for Vita.[2] It was later stated that the cancellation was due to critical technical problems including server cross-compatibility and problems with the multiplayer.[20]

Casual outfit obtained from pre-registering for the game. 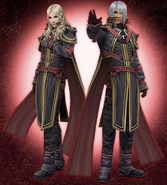 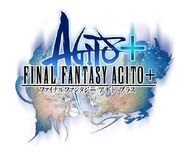 [view · edit · purge]Agito [aɡɪtoː] is a Latin verb conjugation meaning "I put in motion". It is the first principal part (first-person singular present active indicative) and citation form of the verb; its infinitive form is agitāre, "to put in motion".