The following is a list of magic spells in Final Fantasy Adventure. There are eight kinds of magic for recovery and attack. Spells are not bought in stores or acquired by accumulating experience, but are found in treasure chests or passed along from other characters. Unlike an item, a magic spell in the player's possession can be used consecutively any number of times as long as they have enough MP to perform it.

To use a spell, the player must equip Sumo with the magic spell of their choice, and press

to execute it on the World Screen. Some types of magic require manipulation with the control pad (Ice spell), while others need no manipulation. The power of the spell depends on the Will Gauge. If the gauge is full, the strongest effect/damage of the magic spell will be unleashed. 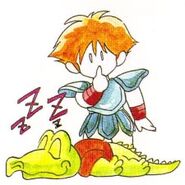 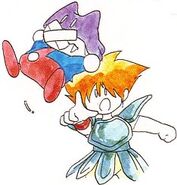 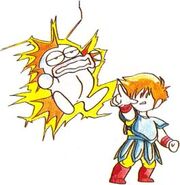 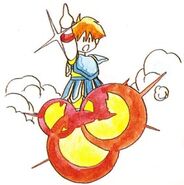 Nuke.
Add a photo to this gallery
Final Fantasy Adventure
Magic
Retrieved from "https://finalfantasy.fandom.com/wiki/Final_Fantasy_Adventure_spells?oldid=2975927"
Community content is available under CC-BY-SA unless otherwise noted.