Final Fantasy 30th Anniversary x Yokohama was a series of five collaboration events between Square Enix and Open Yokohama in and around the seaport city of Yokohama, Japan to mark the celebration of the 30th anniversary of the Final Fantasy series in 2017.

In an interview with Naoki Yoshida, he revealed that the Intercontinental Yokohama Grand Hotel was chosen because the original company, Square, had its humble beginnings in Yokohama.[1] Planning for the projection mapping began in 2015 and actual production took Yoshida’s team more than half a year to complete.[1]

The show unfolds with an initial tribute to the entire Final Fantasy series, followed by the introduction of a ragtag team of adventurers: the reliable paladin, a mysterious black mage, the stalwart dragoon, and a cute little white mage. Before long, the ominous presence of the primal dragon, Bahamut, makes itself known by razing the entire city. Our heroes rallied to take down this immense force of evil. In the face of certain defeat, our heroes fought valiantly and finally managed to seal the evil dragon away into the depths of time.

The display lasts for roughly 10 minutes and was shown several times at scheduled intervals on the 10th and 11th June 2017. 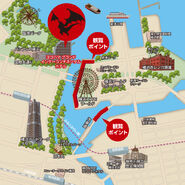 Alongside the Final Fantasy XIV 3D projection mapping, the second event was a series of Dissidia Final Fantasy Opera Omnia flags hung within the large Queen's Square Yokohama complex that featured several characters from the game. 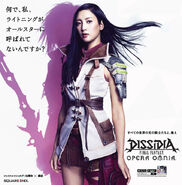 The third collaboration event was a set of Mobius Final Fantasy and Final Fantasy Brave Exvius themed bento boxes which could be purchased between the 24th June 2017 and the 17th July 2017 at selected Kiyoken restaurants and stores. A Final Fantasy 30th Anniversary themed soy-sauce bottle was included as part of each bento box.

The forth collaboration event was a special exhibition of over 10,000 Final Fantasy Play Arts figures displayed at the Yokohama Doll Museum between the 24th June 2017 and the 17th July 2017. 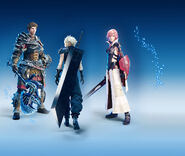