Make me the fayth. I've been doing some thinking. My dream is back in the other Zanarkand. I wanted to make that runt into a star blitz player. Show him the view from the top, you know. But now I know there's no way home for me. I'm never going to see him again. My dream's never gonna come true. So make me the fayth. I'll fight Sin with you, Braska. Then maybe my life will have meaning, you know.

The Final Aeon is created from someone who shares a deep bond with the summoner: a friend, family member, or lover.[1] Lady Yunalesca was the first to call the Final Aeon, her husband: Lord Zaon. Yu Yevon, the mindless, unsent spirit of the ruler of Zanarkand 1000 years ago, resides inside of Sin and uses it as his armor. The Final Aeon can pierce Yu Yevon's armor, and destroy Sin, but once Sin is defeated, Yu Yevon takes control of the Final Aeon severing the bond between it and the summoner, killing the latter.[2] Yu Yevon then uses the Final Aeon to rebuild his armor, making the Final Aeon the new Sin. The period of peace before the rebuilt Sin returns is known as the Calm.

When Seymour Guado was young his mother brought him to Zanarkand and had Yunalesca turn her into a fayth for Seymour to obtain the Final Aeon, but Seymour never used the aeon he'd obtained to battle Sin.

Obtaining the Final Aeon is initially Yuna's goal, but after she learns of the futility of defeating Sin with the Final Summoning, she rejects it and decides they must find another way. They pacify Sin via the "Hymn of the Fayth" and fly into it with their airship and traverse Sin's innards till they reach the core. In the final battle before challenging Yu Yevon, the party fights Braska's Final Aeon, Jecht, the last fayth Yu Yevon used to create Sin.

Known Final Aeons and their fayth[] 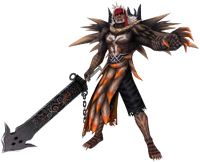 Final Aeon is Jecht's EX Mode. As Final Aeon he gains the Regen status, which slowly regenerates HP. Jecht also gains the ability "Full Combo," letting him continue his Bravery combos even if the initial strike misses. This lets him overwhelm opponents with powerful combo attacks, and also makes it easier to strike when pausing to charge up his attacks.

[view · edit · purge]The Greek word aeon, also spelled eon, indicates a period of existence or long space of time. It may be translated as "age". In Gnostic lore, the Aeons were emanations of God.