I'm gonna learn to fly all by myself! I wanna fly higher than anyone's ever flown before!

In Final Fantasy XII, Filo has silverish brown bobbed hair with evenly cut bangs divided more to the right. She wears a short-cropped caramel-cream fitting top with white laces, a pair of silver bangles, and out-spread caramel-cream baggy pants, along with a brown leather belt wrapped with dark brown straps. Gray straps which cover her shanks, and she wears a pair of tan sandal-like shoes with knee-high straps.

In Final Fantasy XII: Revenant Wings, Filo has brown eyes and chin-length straight brown hair with green goggles on her forehead. She wears a pink vest and a single pink-and-white glove on her right hand, yellow shorts with a white flower print. She has a thick red and green belt, a tan pouch, and brown sandal-like shoes with pink knee-high straps and a small white flower. She always carries her skybandit with her, which she uses to move, and is attached to her ankle by a strap.

Filo is often upbeat, enthusiastic, energetic and hasty. She is all about training to be a real sky pirate and wishes to soar the sky on her own. According to a few of her friends, she is strict, and Filo punishes her friends by giving them extra training to make up for ignoring their training to go play. She is confident and bold, quite opposed to Kytes.

Filo lives in Lowtown and is friends with a boy named Kytes, a fellow orphan. She is part of the Buccaneer's Battalion. When a strange woman with amnesia wanders to Rabanastre, Filo is among the kids to help Vaan solve the mystery.

Another orphan from lowtown, Filo follows faithfully in Vaan's footsteps. She still bears the emotional scars of the war, but she doesn't let them interfere with her dream of becoming a sky pirate.

Along with Kytes, Filo joins Vaan on his new adventure. When Galbana arrives outside Rabanastre, she tags along to inspect it. The Galbana turns out to be an airship that takes the trio to the newly-discovered sky continent of Lemurés where they run into an aegyl Llyud. The three decide to help him protect his homeland and become familiar with the Espers native to the Lemurés, known as Yarhi by the aegyl. Filo develops a crush on Llyud, and after Sky Saloon on the Galbana is opened, Filo lets Vaan decorate the central fountain with mementos.

Filo is taken hostage by Ba'Gamnan in the Underfane of Yaxin Qul, but is rescued by the party.

In Final Fantasy XII, Filo has a small part in helping Vaan in the three medallions sidequest.

In Revenant Wings, she is a playable party leader who is part of Vaan's sky-pirating group since the beginning. She is the party's flying unit. 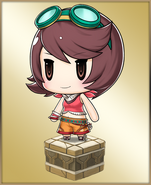 Filo appears in the trading card game with a wind-elemental card showcasing her official Final Fantasy XII: Revenant Wings artwork. She has the wind-element as she is a flying unit in Revenant Wings, utilizing a hover board.

Phyllo is Greek for "leaf". It is also the name of a Greek pastry, which is made up of tissue-thin layers. Phyllo is also spelled as filo.