The Fighter (闘士, Tōshi?), also known as the Warrior and abbreviated as FGT, is a recurring job in the series, often appearing in the Ivalice subseries entries as a job for the hume race. Fighters wield light one-handed swords known as Blades, but lack the ability to equip light armor. Its fighting style involves the user utilizing their aggression to perform strong physical attacks, but at the expense of a specific stat of the user.

Despite sharing the name of the previous localized name of the recurring Warrior job, the Fighter of the Ivalice titles is not the same job.

Warriors are a hume enemy job unit that appears throughout the events of the game.

The Fighter (FGT) is the powerhouse of the hume race. Fighters have many useful abilities that can overwhelm enemy opponents from close range or far away, and with access to support abilities, like Strikeback or Doublehand, they can easily defeat the opposition due to their high Attack stats.

The Fighter returns as a job class exclusive to humes. It makes use of blades and is capable of inflicting heavy damage, as all of their abilities revolve around doing so, both at range and point-blank. A drawback to the Fighter is his inability to equip heavy armor.

In addition, Jecht from Final Fantasy X had a unique version of the Fighter available as his job. His only ability was Triumphant Grasp.

The Fighter appeared as an advance job for players to unlock after clearing the Dimensional Tower dungeon. It gained a bonus to Attack and Defense for using their fists, greatswords, and Strength-based abilities. 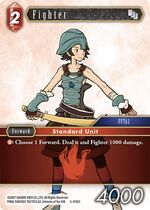 The Fighter appeared as a normal job card in the defunct Square Enix browser game, Knights of the Crystals. Both male and female Fighters were featured.

In context to the original Japanese name, (闘士, Tōshi?), the Fighter job of the Ivalice titles are meant to be reminiscent of gladiators or boxers who engaged in combat as an arena sport. This context explains the Fighter's use of barehanded physical attacks and Pugilism skills. 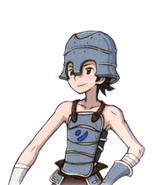