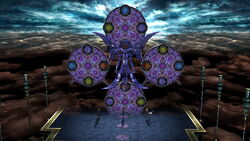 "Fight With Seymour" (シーモアバトル, Shīmoa Batoru?, lit. Seymour Battle), also known as "Seymour Battle", is a boss battle theme from Final Fantasy X that plays during the battle against Seymour Omnis. It was one of the tracks chosen for the U.S. Official Soundtrack Album of Final Fantasy X.

"Seymour Battle" plays during the final battle against Seymour in his Omnis form. In the HD version, it includes some choirs in the background around the late portions of the song.

"Fight with Seymour" is included in the music player as the fourth track of Memories of FFX album bought from the Wiz Chocobo Post for 100 gil.

"Fight With Seymour" appears as a bonus track. It can be purchased for 500 PP on the PP Catalog after clearing Shade Impulse. After purchased, it can be chosen as a background music for a battle, or may be automatically chosen when Tidus or Jecht are fought, or if a battle is fought at Dream's End.

"Fight With Seymour" is a bonus track. It acts as the boss battle theme for Yuna's first encounter with the Emperor, and again during Tidus's encounter with him during 013. Its cost has been reduced to 150 PP from the PP Catalog, and is now available from the start.

An arrangement of "Fight With Seymour" appears as a battle theme. It was arranged by Takeharu Ishimoto and is a default theme. The original PlayStation 2 version can be bought from the shop for 3,600 gil, and the arrangement from Theatrhythm Final Fantasy All-Star Carnival was available from an event.

"Fight With Seymour" is the Battle Music Sequence chosen to represent Final Fantasy X in Series Mode. The background featured during the song is Dream's End, but when played during a Dark Note, the Garden of Pain (where the party fought Seymour Omnis) is featured instead. The theme is included in Theatrhythm Final Fantasy Compilation Album.

"Fight With Seymour" is a Battle Music Sequence for Final Fantasy X. It also appears on the Best of Theatrhythm Final Fantasy Curtain Call album.

"Fight With Seymour" appears as a playable Battle Music Sequence. It is available by default.

Chocobo to Mahou no Ehon: Majo to Shoujo to Go-nin no YuushaEdit

A remix of "Seymour Battle" appears and was arranged by Yuzo Takahashi, it is the 23rd track in the Chocobo to Mahou no Ehon Series Original Soundtrack.

The track appears in the 8-bit arrangement album as its seventh track.

"Fight With Seymour" is included on the fifth disc of this collector's edition set.

A live recording of "Fight with Seymour" from at the London premiere of the concert of the same name on February 15, 2014, conducted by Arnie Roth, is included on this album.