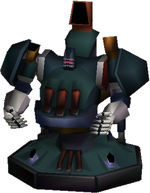 This jaunty rock song from FFVII's boss fights starts with an exciting guitar solo and is far and away one of the most popular songs in the long FF series.

"Fight On!" first plays in the battle against the Air Buster, and is used for every boss battle thereafter up to and including Diamond Weapon, and excluding the multiple battles with Jenova, Hojo, and the final battles, as well as the battle against Proud Clod. "Fight On!" also continues to play following the battle with Rufus at Shinra Building, and continues until the "Crazy Motorcycle" sequence begins.

"Fight On!" is the twentieth track of the Final Fantasy VII: Original Soundtrack first disc.

A hard rock arrangement of "Fight On!" plays during the heroes' battle against Bahamut SIN at Edge. "Those Who Fight Further [FFVII AC Version]" is the third track of the Final Fantasy VII: Advent Children Original Soundtrack second disc.

The Summoned (from FFVII "Fight On!")

"The Summoned (from FFVII "Fight On!")" is a fast-paced arrangement by Takeharu Ishimoto. It appears as the battle theme for the battles against Ifrit, Bahamut, and Bahamut Fury. It also plays during the battle against the first boss, the virtual Behemoth.

"The Summoned (from FFVII "Fight On!")" is the fifteenth track of the first disc of the Crisis Core -Final Fantasy VII- Original Soundtrack.

"Fight On!" is a musical disc for jukeboxes bought from a shop in the Sector 6 slums souvenir shop for 50 gil in Chapter 14. It is needed for "The Power of Music" quest. It is a heavy metal rendition.

Another heavy metal arrangement, which pays homage to the original version, was arranged & co-composed by Tadayoshi Makino and plays during the Airbuster battle.

Orchestral version, with an almost identical arrangement as the original, plays during The Arsenal boss battle.

"Fight On!" is also included within S7-6 Annex Diversion, Hell House, and Midgar Expressway themes. It is also referenced within "One-Winged Angel - Rebirth".

"Fight On! -arrange- from FINAL FANTASY VII" is an arrangement by Takeharu Ishimoto. It appears as one of the two default Final Fantasy VII battle themes. It is the third track of the Dissidia Final Fantasy Original Soundtrack second disc.

"Fight On!" can be automatically selected for battles including Sephiroth or Cloud, or taking place at Planet's Core. It is also played during Terra's duel with Cloud in Destiny Odyssey.

"Fight On! -arrange- from FINAL FANTASY VII" is a battle theme. It can be automatically selected for battles including Tifa Lockhart, Sephiroth, or Cloud Strife, or taking place at Planet's Core.

"Fight On!" is a bonus Battle Music Sequence available as a downloadable content.

"Fight On!" is a Battle Music Sequence for Final Fantasy VII and is available in the base game.

"Fight On!" is a playable Battle Music Sequence. It is available by default.

"Prismelody: Fight On!" from World of Final Fantasy

A remixed version of "Fight On!" serves as Cloud's Champion theme. It plays when he is summoned, and can also be selected as the BGM for random battles.

"Fight On!" is included as part of the 6th anniversary special arrange medley, taken from the top 10 music from All Final Fantasy Big Vote.

As part of the collaboration with Final Fantasy Record Keeper, the Cloud and Zack:FFRK card was released. Its ability, Those Who Fight Further, is a single-target attack that bestows the "Windforce" status. When the crystal sword called by the card hits, a snippet of "Fight On!" is heard.

An arrangement of "Fight On!" by the Black Mages's was included on their first, eponymous album. It is the eight track of the album and was released as "Those Who Fight Further".

The song is part of the 8-bit arrangement album as its sixth track.

"Fight On!" is the second song in this piano arrangement album.

The Black Mages's arranged "Those Who Fight Further" from their debut album was performed live at this 2003 concert that took place at Shibuya-AX and Kanagawa University. It was the seventh song of the line-up.

The Black Mages' "Those Who Fight Further" was again performed at their 2005 concerts at Club Citta in Kawasaki City, Japan and Namba Hatch in Osaka City, Japan. It was the eight song of the concert.

"Fight On!" is included in this Final Fantasy VII best-of album as "Still More Fighting", of which it is the third track.

"Fight On!" is included on the fifth disc of this collector's edition set.

"Fight On!" is included on the first disc of this collectors' edition.

The original version of this theme is included.

"Let the Battles Begin!" and "Fight On!" were originally the only two songs that could be played when fighting on the Midgar stage; this has been updated as of the Version 10.0 patch. The stages now includes additional tracks added as a part of the Sephiroth DLC pack.