It doesn't look like it, but this castle incorporates some of the most high-tech devices in existence. For example, ... Oops... they're all top-secret!

Figaro Castle is a castle in Final Fantasy VI located in the middle of a desert, and is ruled by Edgar Roni Figaro. Outside of the Gestahlian Empire it is the most technologically advanced nation in the world, and is the dominant force on the northern continent. The castle appears to be a traditional medieval fortification built from stone blocks with ramparts and turrets extending along its length, but unlike regular castles, there are turbines running through the turrets alluding to the kingdom's high technology.

Ten years ago the previous king of Figaro died, and it was rumored he was poisoned by the Empire. The king's final wish was for the kingdom be ruled jointly by his two sons, Edgar and Sabin. Sabin was disgusted with the kingdom's focus on the king's successor rather than his death, and told Edgar he wished to flee. Edgar told Sabin they would decide what they would do via a coin flip: the winner could leave, while the loser would remain to rule Figaro. Edgar used a two-headed coin to ensure Sabin's win, and Sabin opted to leave and live freely.

Ten years later Edgar is publicly allied with the Empire while secretly supplying resources to the Returners, a rebel faction, using Locke Cole as a go-between. The Empire likewise feigns allegiance. When a young woman, Terra, is rescued by Locke in Narshe after escaping the Empire, Locke takes her to Figaro for shelter where they attempt to convince her to join the Returners. An Imperial general, Kefka Palazzo, comes to Figaro to find Terra, and is irritated at its location amid a desert. Although Edgar insists Terra isn't there, Kefka remains suspicious and sets fire to the castle. The castle burrows underground while Edgar, Terra and Locke flee on chocobos. Later, when Terra goes missing, the Returners use Figaro Castle's ability to burrow under the desert to travel under the western mountains to Kohlingen.

Sometime after the cataclysm Figaro burrowed underground and was trapped when its engines stall due to an obstacle. By chance the castle stopped next to a sandworm nest, and the monsters burrowed into the castle through the prison and entangled in the engines. The Crimson Robbers used the sandworm tunnels to escape to the surface, while the castle remained trapped underground, the inhabitants alive but slowly running out of oxygen. Edgar approaches the robbers under the alias "Gerad" and convinces them to re-enter the castle and take their treasure from the storeroom as an excuse to get inside the castle and help Figaro.

Found by Celes and Sabin in Nikeah, Edgar is followed by them as they suspect his true identity. They follow him through the South Figaro Cave into the castle where Edgar reveals himself and the three kill the tentacles disabling the burrow mechanism, freeing the castle to surface, while the Crimson Robbers assume "Gerad" is killed by the monster and leave, unaware of what really happened. Celes, Sabin and Edgar use the castle's burrowing ability to travel to Kohlingen.

Several castle inhabitants mention that many people from the castle joined the Cult of Kefka, explaining why several areas, which previously had guards posted, are now unguarded.

Figaro Castle is located in the middle of a vast desert on the northern continent. A cave connects to the town to South Figaro.

The castle itself consists of a brief entrance tower that opens onto a crosswalk leading north to the keep, or east and west to the castle wings. The castle has two auxiliary towers connected by bridges, the eastern tower hosts a guest's quarters and the western tower is the king's quarters. The walkways connecting the two towers to the main castle are accessible on foot, but there is no way to reach them in-game. When the castle submerges, these walkways and connected towers retract into the castle.

The castle prison is accessible by the right-hand stairwell in the entrance tower, and contains four cells patrolled by a guard. The prisoners, the Crimson Robbers and Lone Wolf the Pickpocket, can be spoken to through the bars when they come close enough. When the player revisits Figaro Castle after the imperial attack on Narshe, Lone Wolf will have escaped and is no longer here.

In the World of Ruin, the Crimson Robbers have escaped and the cells are empty. When the player first comes through here via the South Figaro Cave, the right-most cell will be open and the back of the cell will connect to the cave. On return visits to the castle, when it stops underground, the right-most cell will connect to the Ancient Castle, but when the castle is surfaced, the cell door will be shut.

The engine room is accessible by the left-hand stairwell in the entrance tower. The engineer here oversees the castle's movements from South Figaro to Kohlingen, but this is only available after returning to the castle after the Battle for the Frozen Esper at Narshe. In the World of Ruin after retrieving the Falcon, if the player uses the castle's movement functionality, there will be a disruption in the travel and the player has the option to stop and exit through the prison to explore the Ancient Castle.

The west wing contains a rest stop where the player can sleep and heal the party. A stairwell down exits to the sands on the western side of the castle and then the western auxiliary tower. The tower holds Edgar's room, a large room with a fireplace, a bed sectioned off with curtains, and a dining table.

The castle's keep contains two shops, one merchant selling general goods and the other selling Tools that Edgar can use in battle. Two passages astride the doors to the throne room lead to a small room that connects to the pinnacle of the castle. The throne room contains two thrones at the end of rows of pillars.

The merchants change their inventories on the party's second visit after revisiting Narshe and participating in the Battle for the Frozen Esper. They also have new inventories in the World of Ruin.

On the first visit to the castle, there are three treasures in the item shops, containing a Potion, Antidote, and Gold Needle. The room behind the throne room has a chest with a Phoenix Down.

The engine room has four chests in a room at the end of the hall to the engines, containing X-Potion, Hi-Ether, Gravity Rod, and Crystal Helm. A side path to the left and up a flight of stairs leads to a small room with a Royal Crown. The treasure room beyond the engines is looted by the Crimson Robbers, but a Soul Sabre can be acquired by inspecting the suit of armor in the room.

After acquiring the Falcon, the player can return to Figaro Castle and use it to travel. While burrowing underground the castle is obstructed and the player has the option to stop and investigate. Going through the prison cells reveals a cave leading to the Ancient Castle, where the Odin and Raiden magicites and optional bosses Samurai Soul and Blue Dragon can be found. A scholar in the library will give the player a hint if spoken to in opening a secret passage within the Ancient Castle.

At any time in either the World of Balance or World of Ruin, if the player returns to Figaro with Sabin in the party, he will leave to look around the castle. Resting in the castle with both Sabin and Edgar in the party triggers a scene where Sabin reminisces on why he left years ago, resulting in a series of flashbacks showing the circumstances of his departure. When the party awakens in the morning, Sabin will be with them again.

If Edgar is in the party but Sabin is not, there will be a brief scene of Edgar wishing Sabin was there; if Sabin is in the party but Edgar is not, he will still leave the party to look around the castle, but resting will not trigger the flashback scenes. If the player attempts to leave the castle after Sabin leaves the party, he will run up to them and rejoin as they do so. It is only possible to leave the castle by the front door while Sabin is absent; the stairwells to the auxiliary towers and the outskirts of the castle where the player could exit otherwise are blocked by guards until Sabin rejoins the party.

The chancellor has extra dialog if spoken to with Edgar or Sabin. The shop-owners have extra dialog with either brother in the party, with Edgar's taking priority. 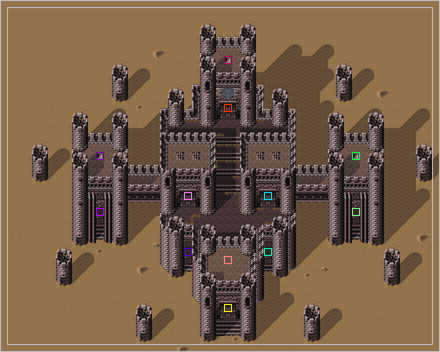 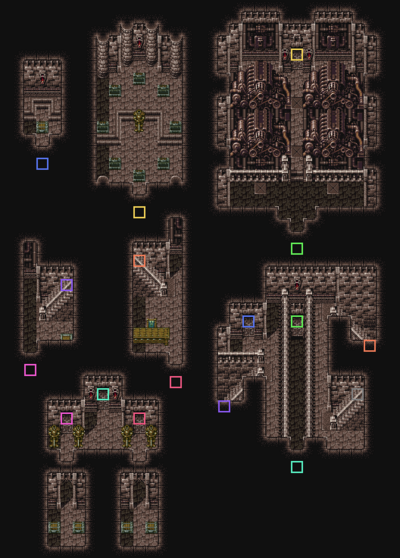 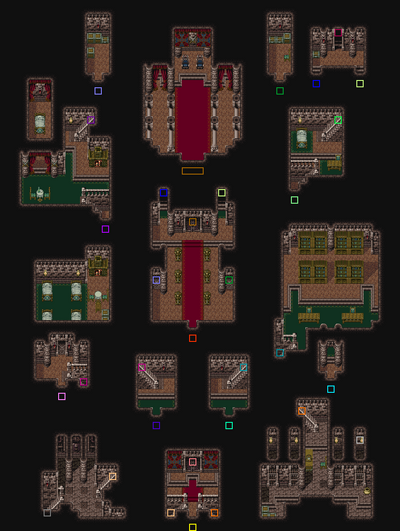 "Edgar & Sabin" is the background theme that plays at the Figaro Castle, while "The Returners" plays briefly during the infiltration of Gerad's gang into the castle.

One of the original servers was named Figaro. It was merged with the Melmond server into the Aegis server.

Figaro is present as a room for customized characters of the game's Multiplayer Mode Online Lobby.

Figaro Castle makes an appearance in the Field Music Sequence of "Terra's Theme".

Figaro Castle appears as the FMS for "Edgar and Sabin's Theme".

Figaro Castle is the setting for two regular dungeons and it later appears in the Challenge Events Legendary Plunder, A Fateful Coin Toss, and Back to the Skies.

Locke and Terra have escaped the mines to the desert castle of Figaro, but the arm of the Empire reaches after them with Kefka's approach.

Celes' party leaves Terra in Mobliz and continues on to the port town of Nikeah, where they encounter a bandit named Gerad trying to enter Figaro Castle. The bandit looks suspiciously similar to Edgar...

According to Final Fantasy VI Settei Shiryō-hen, Figaro Castle was constructed 200 years prior to the start of Final Fantasy VI, shortly after a series of industrial and artistic revolutions. The castle was mechanized 118 years later, and attempted its first submerging eight years after that, but it was a failure. A temporary palace was constructed at South Figaro, and four years and two more attempts later, the castle successfully submerged, and became known as the "illusory castle". Several points of information in Final Fantasy VI Settei Shiryō-hen contradict information given in-game (for instance, Figaro's previous king is said in-game to have perished ten years before Final Fantasy VI, while the guidebook says he died seven years prior), so it is unknown to what degree this history can be considered canonical.

The artwork for the Tentacles boss in the engine room appears to picture Terra being gripped by one of the Tentacles, even though Terra cannot be in the party for this boss fight. 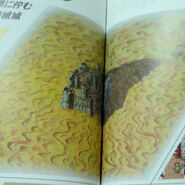 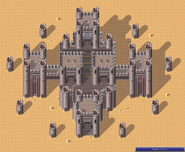 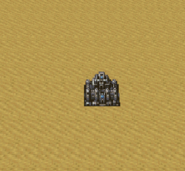 Figaro Castle as it appears on the world map. 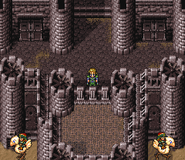 Figaro Castle on the World of Balance map, east side.

Figaro Castle on the World of Ruin map, west side.

The outside part of the upper floor.

Figaro Castle on the World of Balance map, west side.

Sabin and Edgar on the throne.

Kefka sets the castle on fire.

[view · edit · purge]Figaro is a French and Italian word for "barber", as well as the name of the central character from Pierre Beaumarchais's 1775 play The Barber of Seville.