The Fiend Colony is an optional dungeon in Final Fantasy X-2 located on the Mi'ihen Highroad. The player must dispatch a level four or five chocobo to the highroad from Clasko's Chocobo Ranch during Chapter 5 to access it. Once it returns, Clasko will report a new dungeon has been found.

To travel through the dungeon, the player will need to destroy stone walls with bombs. Near the entrance, the player can find some S-Bombs, and fighting random battles will get more. Some walls cannot be bombed; the game (usually) gives a clue by showing a strong breeze blowing through the cracks in the bomb-able stone walls, displayed as Yuna's sash fluttering when she is near a stone wall. Some walls are stronger than others, requiring the player to use M-Bombs or even L-Bombs.

Walls are either 5 point (the great majority), 10 point (six of these), or 25 point (only two such), while S-Bombs take away 1 point, M-Bombs 2, and L-Bombs 3. Repeatedly bombing a wall will "make the locals angry" and opening certain chests will begin a set battle with a random Vermin, inescapable and not avoidable with the Charm Bangle. There are also fake walls; attempting to destroy one starts a similarly unavoidable and inescapable battle with an Epitaph. L-Bombs from Hexapods (all drops and Bribes) are one of only two sources of the main ingredients for the Hazardous Shell Mix effect, the other being the considerably rarer Gold Hourglass from Oversouled Deep Haizhe.

Once the player reaches the back of the cave, they will have to fight the King VERMIN! After it is defeated, the party is automatically returned to the colony entrance and all the walls are reset. The player also receives the Font of Power Garment Grid.

The theme that plays in the Colony is "Sphere Hunters". 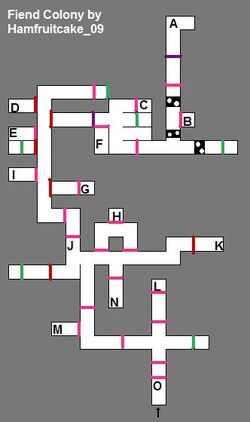 Entrance to the Fiend Colony.