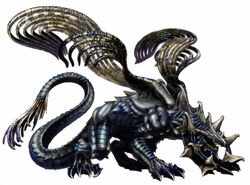 You see, they envy the living. And in time, that envy turns to anger, even hate. Should these souls remain in Spira, they become fiends that prey on the living.

In the world of Final Fantasy X, fiend (魔物, Mamono?, lit. Demon) is a Spiran term for the monsters that inhabit the land, the spirits of the dead who stay in the living world instead of departing to the Farplane.

Consumed by sadness and rage, the spirits use pyreflies to assume a warped physical form. Each fiend is a reflection of the person they were in life, ranging from an embodiment of their greatest desire to an appearance reflecting a misdeed. There are also fiends that came into existence without being alive to begin with, as well as living creatures categorized with fiends, like Cactuar, who are simply a part of a life cycle of desert cacti.

Fiends are often driven to prey on the living, but there are also fiends who pose no threat and only attack when their homes are invaded. Summoners perform a sending to guide the wayward souls to the Farplane before they can become fiends. Vanquishing a fiend also disperses its pyreflies. After the Eternal Calm, the tradition of performing sendings ended, and the fiends can only send themselves on the condition they fulfill an obligation they failed to achieve in life. Final Fantasy X-2 Ultimania Omega elaborates that pyreflies continue to appear in great numbers after the Eternal Calm because the destruction of Sin had broken the cycle of sending the dead, resulting in the sudden increase of fiends as pyreflies are their life force.[1] In the novel and audio drama sequels, sending has become its own occupation, now performed by senders.

Not all unsent are destined to transform into fiends, some maintaining the forms they had in life due to a strong desire and sense of purpose. Many fiends revert to the forms they had in life, only few able to maintain the form for a long period of time, and effectively gaining a second chance at life. Some unsent transform into fiendish forms by absorbing pyreflies into their bodies.

Despite their hatred and envy, fiends can be tamed, as shown in Final Fantasy X-2.