South of the vast Golmore jungle in Kerwon there lies a place known as the 'Feywood'. The Mist there is far denser than most, and even should you make it through that, there's no guarantee you'll make it past what lies beyond.

The Feywood is a location in the land of Ivalice in Final Fantasy XII. It is an ancient forest that provides a passageway to the holy city of Giruvegan. Parts of the wood are blocked by a thick wall of Mist, until after the events in the Draklor Laboratory. The Feywood is similar to the Snowfly Forest in Vagrant Story, also directed by Yasumi Matsuno.

An ancient wood deep in the jungles of Golmore. The combination of dense Mist and regular snow, the latter a product of the region's elevation, is enough to keep away even the viera. Many of the trees have stood for several thousands of years, and some have begun to petrify. Numerous plants once thought extinct grow here, and many rare birds and animals can be seen in their primitive forms, unchanged for millennia.

The Feywood is located just to the southwest of Golmore Jungle. This area can be visited as soon as the player obtains the Lente's Tear, but the player needs to complete the events at the Draklor Laboratory to investigate further from the Antiquity's End.

Areas within the Feywood are:

The weather in Feywood never changes; the areas have fixed weather:

In the original version, treasures in the Feywood are never gil. All the treasures before going through the wall of thick mist are either Hi-Potion/Hi-Ether or a gambit. With the Diamond Armlet equipped the regular item treasure is Knot of Rust and the rare item is Elixir. The gambits that can be found in the area include the G-Foe: char MP >= X% gambits in the Walk of Flitting Rifts and Walk of Stolen Truths areas, and G-Foe: HP >= X gambits and gambits for foes with Bravery and Faith in Walk of Dancing Shadow area.

In the Edge of Reason a group of three treasures spawns in the middle, a bit northeast from the exit to Giruvegan. One of them only has 25% chance to spawn and will always have the Ensanguined Shield. Of the other treasures one has an X-Potion and the last one can have either a Hi-Potion or Deathbringer.

In the Zodiac versions, all treasures are different. Near the Save Crystal, there is a treasure with an Embroidered Tippet, an accessory that doubles EXP gain. The middle of the Ice Field of Clearsight has the Bubble Belt, an accessory that doubles the wearer's HP. The same area also has various other equipment pieces. The Edge of Reason has various weapons, and the Reflectga spell.

ThIs chest only appears in the Zodiac versions. It does not respawn.

The Edge of Reason[]

After the events at the Draklor Laboratory, the party follows Dr. Cid to the ancient city of Giruvegan, but must go through the Feywood first. They are blocked by a wall of thick Mist, but Rasler's ghost unlocks the way. A carnivorous plant, Rafflesia, fights the party and after it is defeated, the party are blocked by an illusion puzzle. The party completes the puzzle and summons Belias to unlock the gate to Giruvegan.

Later, the Wild Malboro from the 'A Wild Stench' Hunt can be found where the Rafflesia was defeated.

Opening the way to Giruvegan[]

In this sanctum shall the pilgrim find truth and illusion both. Illusion betokens the true way.

The puzzle consists of following a set path through and between "shrines". The shrines are in the shape of a Gazebo, with six thin pillars supporting a hexagonal roof, effectively making six "doorways". In the middle, the player can examine a "Feywood Glyph" to receive the "truth and illusion" message. An "illusion" of a forest path can be seen through one of the gaps, and the player must exit the shrine on that side to find the "true way", and keep going in that same direction to find the next shrine and its illusory pathway. The player has to do this whole process twice: first, to find the exit of the first area, and again to find the gate to Giruvegan. Once Gate Gigas is located, it needs a gigas to open it; summoning Belias opens the way.

Mandragora Prince, Alraune King, Onion Queen, Pumpkin Star and Topstalk spawn in the Feywood (they were originally fought in the Sochen Cave Palace). Repeatedly killing them in the Feywood is needed to reveal all pages of their bestiary entry.

To spawn the mandragoras in the Feywood, the player must clear out all 29 enemies in the Ice Field of Clearsight area, zone to the White Magick's Embrace area and then return. To respawn them after they have been defeated, the player must zone to the Redolent Glade area and then back to Ice Field of Clearsight without leaving the Feywood. All five of the mandragora-type enemies will have reappeared, and the player can chain them to get better chance of their rare drops.

They run away to the shrines. They boost their level when they spend too much time away from the party, potentially reaching the max of 99, making them potentially highly dangerous.

The Wild Malboro is a Rank VI Mark whose hunt becomes available after the events in Giruvegan. It can be found in the Redolent Glade area, the place where Rafflesia was fought. Wild Malboro is flanked with a few Malboros, and both monsters will inflict a plethora of status ailments. The hunt is petitioned by Rena in Eruyt Village.

To find the Dreadguard the player must have spoken to the "Huntmaster" in Phon Coast and defeated Thalassinon, which will trigger the start of the Rare Game quest. Dreadguard then has a 40% chance of spawning in the Walk Of Dancing Shadow per entry. When it spawns, it replaces a regular Mirrorknight. If the Dreadguard doesn't spawn, the player must walk away two screens and return, to respawn the enemies.

To spawn the Crypt Bunny, the player must kill at least six Cerberus and all the Tartarus in the Walk of Stolen Truths area. The Crypt Bunny then has a 20% chance of spawning at the eastern side. The Wolf genus enemies respawn at a faster rate than usual and when they stop respawning, the Crypt Bunny appears. There appear to be multiple potential spawn points. Two confirmed locations are by the Southern Golem in the icy gorge-like area, and on the northernmost path.

Juggernaut spawns in the White Magick's Embrace area along the trees when the game clock's minute shows a number between 0 to 10.

"The Feywood" in Final Fantasy XII

The map can be found in at a dead-end in northeast of the Walk of Stolen Truths.

The candle to reveal the full map can be found in White Magick's Embrace along the eastern wall. 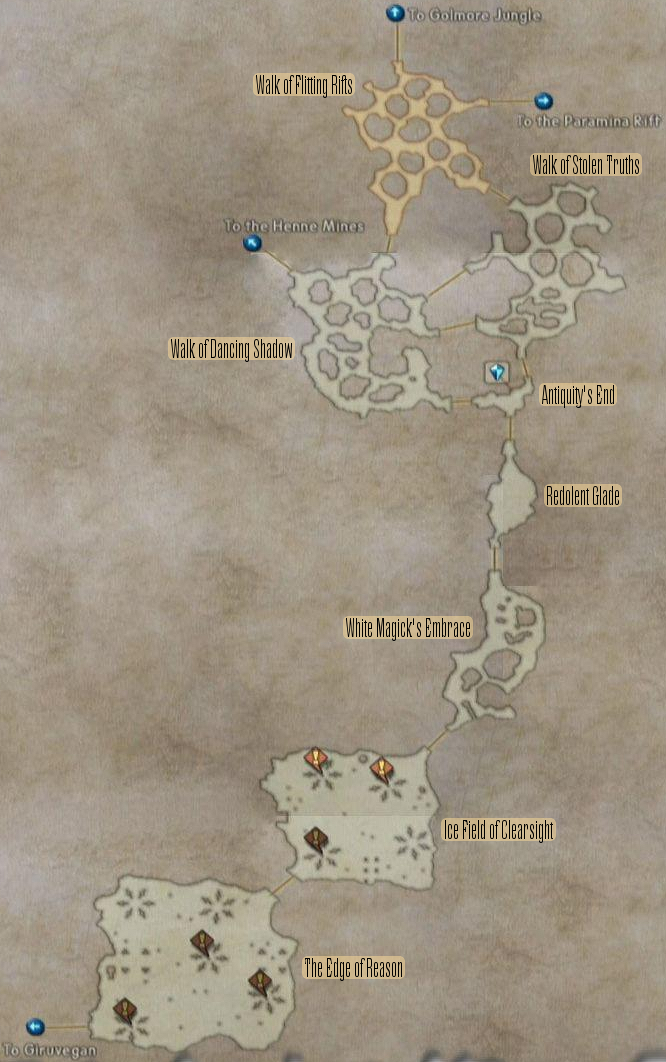 Belias opens the Gate Gigas at the edge of Feywood.