Cid Pollendina: Oh, shut up and help me remodel the Feymarch page!
Please expand this article into a full one. The following tasks need to be completed:

Off-realm, linked by Passage of the Eidolons

A town? Eidolons have their own society!?

The Feymarch, also known as the Land of Monsters or Land of Summons, is a location from Final Fantasy IV, Final Fantasy IV -Interlude- and Final Fantasy IV: The After Years. It is located in the Underworld, and is where eidolons live. The dwarves of Tomra to the Southeast call this place "The Land that Lies Between". The eidolons are guided by their queen Asura and king Leviathan.

Due to the magical power located on the summons' plane, time flows faster in the Feymarch. The town in which the eidolons live is guarded by the Passage of the Eidolons, a cave filled with lava, and only those with the Float spell can bypass it and reach the Feymarch; crossing it without Float will cause HP damage.

In the GBA and PSP remakes, if the player visits the Feymarch without Rydia in the party, the residents will comment on her absence.

Rydia is brought to the Feymarch when Leviathan attacks a ship she is traveling on, and matures very quickly under the watch of the king Leviathan, after which she is sent out to help defeat Golbez.

After obtaining the Falcon, Cecil and his friends can travel to the Feymarch. There, they can interact with many of the land's denizens and fight Asura and Leviathan. After the Queen and King are bested, they will become available for Rydia to summon.

Rydia leaves the Feymarch to attend the reconstruction of Damcyan. Asura lets her through, and hopes that Rydia will return to them safely.

The Mysterious Girl comes to the Feymarch to take the power of the eidolons; Leviathan teleports Rydia away so she can warn the dwarves.

It is the structure farthest north of the streets. A nameless eidolon inhabits it, and the building also has the town's only save point. To start the eidolon search sidequest exclusive to the iOS version, the player must speak to the eidolon in the house, and when all eight are found, the player must talk to him to obtain the Piercing Magic augment.

The Eidolon Library is the building south of the eidolon's house. The first floor and B2 houses all tomes, scriptures, and books on eidolons and eidolon history, which the player can read as a summons crash-course.

It is the library's B3, accessible from B2. As the eidolon guard says, it is Queen Asura and King Leviathan's audience chamber. To speak to and challenge Leviathan, the party must defeat Asura first. After the two are bested, they will give the party their blessings and will wish them luck. During the ending, the audience chamber is shown again.

The Feymarch's theme is called "Town of Illusions." An arranged version of it can be found on the Final Fantasy IV: Celtic Moon album.

The last Crystal lies within the Sealed Cave. Before the party attempts to claim the Crystal, they follow Rydia's advice and go to the Passage of the Eidolons in hopes of securing the Eidolons' help. 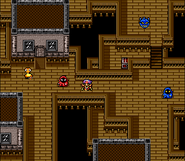 The Town of Feymarch, where the Eidolons live.

Feymarch on the world map in Final Fantasy IV: The After Years (Wii).

Victory screen in The After Years (iOS).

Render of a blue bomb (iOS).

The Japanese dungeon image for The Feymarch in Final Fantasy Record Keeper.

[view · edit · purge]A march is the name given in medieval times for the border region of a country.

The term Feymarch was coined by the translator for the 3D remake, Tom Slattery.

I also felt the creatures' world deserved a proper name. Who would call their own realm 'The Land of Summoned Monsters'? And hey, inventing words is always fun. 'Feymarch' had zero Google hits before the game came out; now it has tens of thousands.