Festivities
Differs based on character

Every day is a festival! Abilities vary by character.

The Festivalist is a dressphere in the International and HD Remaster versions of Final Fantasy X-2. Before the HD remake's release, the Festivalist was also known by the fan-translated name Festival-Goer. It is based on a design sent in by an eight-year-old fan for Square Enix's dress designing competition advertised in Final Fantasy X-2 Ultimania.[1] The dressphere is acquired in the beginning of the game, on board the Celsius, when Yuna talks to Brother. Rikku's line after spherechanging into Festivalist "Party! Ah, ah, ah! Party! Ah, ah ah!" are identical to her brother's pre-battle dialogue.

Each girl wears festive Japanese-style clothing, and has a pair of weapons, one used for regular attacks and the other for unique abilities (unique abilities are named after the weapon used for it).

Yuna wears a long light pink yukata with dark peach circle, heart, and triangle designs as well as white moogle designs. Her obi is white with green hearts, red and blue circles, blue lines and a single large red heart. Her sandals are black and pink. She wears two silver and red temari on each wrist, which she uses for regular attacks and can deal two attacks at once. For her special attacks she uses her sandals; she kicks them off and they explode releasing a spell. Her fireworks color is pink.

Rikku wears a light blue kimono top with darker blue circle designs as well as black and white Cait Sith designs. It is fastened by a blue ribbon and her sleeves are attached using red thread. She wears light blue shorts with darker blue circle designs and pink heart designs. She wears light blue sandals. Her orange goldfish are held in a clear bag tied with a yellow bow and a blue ribbon and the cotton candy is white. She uses cotton candy for regular attacks. For special attacks, she uses the goldfish by letting it out its plastic bag to attack the enemy. The goldfish change color depending on the attack chosen. Her fireworks color is green.

Paine wears an open short-sleeved blue happi with pink lining and white spiral designs, as well as a tonberry design on the back. Under the happi she wears a white bandage-like top. The happi is tied around her waist with a white ribbon bow. She wears tight, blue shorts and white tabi, a pink and white headband and a black choker necklace. She has a yellow chocobo mask on the right side on her head. The chocobo mask resembles the main playable Chocobo in the Chocobo series games.

Her fan is blue with pink line designs as well as a large red and white circle design. She uses the giant fan for regular attacks. The dressphere image of the Festivalist is the fan Paine uses to attack. For special attacks, she uses her mask, which she throws like a disc. Her fireworks color is indigo. Paine wears tabi, Japanese socks mostly worn while wearing traditional kimonos or pre-modern times. Unlike modern socks, the wearer's big toe is in its own section and the other four share one.

The last firework that explodes when the girls transform into this dressphere resembles that girl's Mascot outfit: Yuna's moogle, Rikku's Cait Sith, or Paine's tonberry.

Yuna's victory pose is to jump twice then fan herself. Rikku balances her cotton candy on her forehead, while Paine jumps then poses with her fan held out behind her.

Rikku's Fish abilities summon three goldfish to attack the foe with the element chosen; these fish chain with one another, building on the damage the first deals.

The Festivalist dressphere increases Attack, Magic and Accuracy by 1 point per each level. Multiple copies can be found on the ground inside the tower or bought in shops. It has a relatively high HP growth. Its regular attack range is one tile ahead of the character. 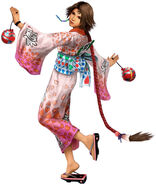 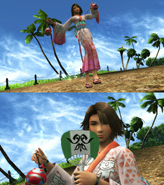 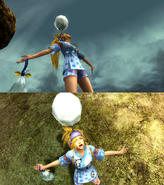 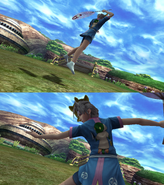 This gallery is incomplete and requires Yuna's weapon, Rikku's weapon and Paine's weapon added. You can help the Final Fantasy Wiki by uploading images.