400 km/h
The Fenrir is Cloud Strife's personal motorcycle in the Compilation of Final Fantasy VII from Final Fantasy VII: Advent Children onwards. The bike is a three-wheeled (two paired up in front and one in the rear) motorized vehicle with extraordinary maneuvering capabilities and with a combination of polished black metal over brushed gold mechanics. On either side of the front tires is an expandable compartment that fits all pieces of the Fusion Swords, and/or the sword's fully completed form.

The Fenrir switches to reverse easily and seems to be able to keep itself upright and accelerating even without a driver.

Fenrir has a top speed of 400 km/h (approximately 250 mph). It has an oval-piston twin cylinder engine and has two front wheels. It seems to have a hip-based turning system, as even though it has handle bars, Cloud can maneuver even while dual-wielding swords. It appears to use a non-returning throttle, a dual throttle system or (the most likely solution) both, as Fenrir can maintain its speed and accelerate when Cloud's right hand is busy wielding his sword. It is also possible the throttle is controlled by foot. The bike has internal storage compartments on either side of the front axle where Cloud stores the individual blades of the Fusion Swords.

Looking for a mode of transportation to use in his new delivery business, Cloud barters with an unspecified owner for the bike, offering them free food and drinks for a lifetime at the 7th Heaven in exchange. Quickly becoming his favored vehicle, Cloud took the bike with him when he began shutting himself off from his friends due to his Geostigma infection; however he soon encountered Kadaj and the other Remnants of Sephiroth astride their bikes while traveling the wastelands surrounding Midgar. While surviving the onslaught, Cloud and the Fenrir would continue becoming entangled with the trio; with Cloud being once forced to crash the Fenrir in order to avoid running into innocent children.

Eventually, Cloud prevails in their final encounters and the Fenrir remains relatively unscathed, despite being hit by an energy blast from Kadaj. A year later, the Fenrir sees combat once more when Cloud rides it into the Battle of Midgar at the front of the ground assault. Upon entering the Midgar ruins he leaves the bike during combat to face Rosso the Crimson.

The motorcycle's origin is revealed in this collection of short stories.

Cloud rides the Fenrir during the Battle of Midgar. Initially stored in the back of Barret Wallace's Shadow Fox truck, it emerges with Cloud astride to lead the World Regenesis Organization ground assault against the Deepground forces.

According to director Naoki Yoshida, Cloud's Fenrir motorcycle from Final Fantasy VII: Advent Children exists in the game as an unused mount. Since it is a grounded mount it would be too slow to make sense, but increasing its speed would make the other grounded mounts useless.[1][2]

A variation of the Fenrir motorcycle called the "SDS Fenrir" will be available for purchase from the Mog Station and as a bonus item for attendees of the 2018-2019 Final Fantasy XIV Fan Festivals.[3] "Crazy Motorcycle" was confirmed to be the background music while the player rides on it. 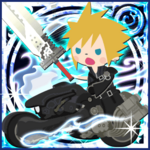 Cloud sometimes appears with the Fenrir when using his abilities.

In Kingdom Hearts II, a special blueprint called Fenrir can be obtained by receiving S-Rank in the Assault of the Dreadnought (Mission 2). It costs 1171 munny and requires 121x Material-G, Fire-G, Meteor-G, Masamune-G, Excalibur-G, Infinity-G, 2x Wheel-G blocks. A Keyblade called Fenrir is modeled after a motorcycle key.

Cloud, in his appearance in the fan-made movie series Dead Fantasy, rides astride the Fenrir.

The Fenrir was designed by Takayuki Takeya who was asked to design an upgraded version of Cloud's Hardy-Daytona motorcycle from Final Fantasy VII. As development continued, the bike got bigger with Takeya feeling its heaviness gave an impact that worked well with the movie.[citation needed]

The Fenrir has three wheels, one in the rear and two in the front. In the Final Fantasy VII Remake, the Hardy-Daytona is redesigned to also have three wheels. 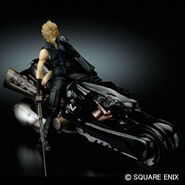 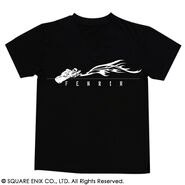 Cloud astride the Fenrir.

The Fenrir in the Forgotten City.

Cloud and Tifa in Edge.

The Fenrir in the remains of Sector 5.

The Fenrir in Reminiscence.