Fenrir is an esper in Final Fantasy VI who can be acquired as a magicite.

It can be obtained in Mobliz in the World of Ruin, after defeating Humbaba for the first time, falling from the chain around its neck.

Fenrir is a dark gray, howling wolf, with red eyes.

Fenrir costs 70 MP to summon, and casts Howling Moon (or Moon Song in earlier releases). This grants Image status to everyone in the party. This is the only way to apply Image status to player's characters who do not have access to the Throw command.

Fenrir is equippable as a magicite and teaches the following abilities: 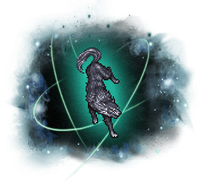 Fenrir appears as the rank 3 wind-elemental magicite encounter, serving as the first encounter for the element series.

In addition, Eiko's Soul Break for Withering Winds uses the image of Final Fantasy VI Fenrir rather than his Final Fantasy IX incarnation.