Earth or Wind (with Maiden's Prayer)

Causes Earth damage to all enemies.

Fenrir is an eidolon in Final Fantasy IX who can be acquired as a summon for Eiko. It is an Earth- or Wind-elemental summon who takes the form of a large wolf who teams up with Titan, a colossus that emerges from the ground. Fenrir is the first eidolon Eiko is likely to summon, as she joins the party with a Sapphire equipped; if she summons in battle before the party reaches Madain Sari, the others express their surprise at the feat.

Fenrir was an eidolon that manifested to protect the crystal of Gaia. The practice of summoning it presumably went back centuries, as Fenrir appeared on a mural on the Eidolon Wall in Madain Sari, the summoners' village on the Outer Continent. As the summoners left the Mist Continent 500 years ago, summon magic fell into legend among the Mist Continent populace.

Ten years ago, Garland ordered Kuja to destroy Madain Sari with the Invincible, killing most summoners. The few survivors had a child, a young girl, but all her elders perished one by one until she was the only summoner left. Eiko thus made a living in the ruins of Madain Sari with only the local moogles for companions. She kept the art of summon magic alive by herself, and resorted to stealing food from the dwarven village of Conde Petie for sustenance. On one such heist a group of travelers from the Mist Continent caught her: Zidane, Dagger, Vivi, and Quina. Eiko showed them hospitality in a bid to not be alone anymore, and the travelers were amazed that she could summon eidolons like Dagger could, who was unfamiliar with the eidolons Eiko could call forth, including Fenrir. Eiko joined the others in the struggle against Kuja's schemes. Kuja kidnapped Eiko to extract her eidolons, but the procedure failed, and so Fenrir stays with Eiko until the end.

Fenrir is a long-haired white-purple-and-gold wolf with red-tipped horns. It has golden eyes and its tail is very long. Bushy white hair frames its head like a lion's mane, and the fur on its back leg sticks out like the shape of the wing ornament Eiko wears on her back.

Titan is a colossus that emerges from the underground. It appears made out of stone and only its upper body is ever seen, the rest remaining embedded in the earth. It has large glowing eyes and pointy ears or horns that look like rock formations. It uses its powerful fist to punch Eiko's enemies into the atmosphere. Titan is not named in-game, but the name was given in an artbook, as well as in the online Tetra Master.

Fenrir costs 30 MP to summon and is learned from a piece of Sapphire for 30 AP. Eiko joins the party with Sapphire already equipped. More can be synthesized at Daguerreo, Black Mage Village (endgame), and with Hades. Eleven are found in the "Outer Island 2" chocograph treasure, and fifteen are found in "Cold Lagoon" chocograph treasure. They also drop from Drakan, Gnoll, Red Dragon, and Iron Man.

Fenrir's default attack, Terrestrial Rage, deals Earth damage to all enemies. If Eiko summons Fenrir while equipped with the Maiden Prayer Add-on, the summon attack changes into Millennial Decay, which deals Wind damage to all enemies. Millennial Decay is slightly stronger than Terrestrial Rage, and both attacks deal more damage the more Sapphires the party has in their inventory.

Maiden Prayer is found in Ipsen's Castle, and in a mountain crack near Oeilvert while using a Dead Pepper on Choco.

The attacks and spell power for Eiko's summons are based on the number of Sapphires in stock and length of animation, the short version being weaker. The formula used to determine the amount of damage an eidolon does during its full animation is as follows:[1]

Fenrir is an especially useful eidolon against enemies weak to Wind and magical damage in general. Fenrir being able to deal either Earth- or Wind-elemental damage makes it versatile. The Wind-version of his summon attack is especially useful against flying enemies, most of them being weak against Wind while being immune to Earth. Few enemies have resistance to Wind whereas no enemy is inherently weak against Earth. Summoning Fenrir earns the Wolf Insanity achievement in the mobile and Steam versions.

If Fenrir's Terrestrial Rage attack is summoned on Bombs, sometimes when they use Grow, their graphic will disappear and they become invisible. This should only be cosmetic and not affect gameplay.

Fenrir has an eidolon-type card for Tetra Master, which can be won from Black mage no.123 in Black Mage Village, from Lani in Madain Sari (Garnet and Amarant must not be in the party or she will leave), and from the Eidolon Master in the Treno Card Stadium. 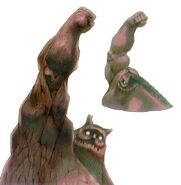 Artwork of Titan punching foes into the air.

Fenrir and the red moon.

Titan is not named in-game, but its name is given in supplementary materials. Titan is a recurring summon in the Final Fantasy series. [view · edit · purge]Titans were members of the second order of divine beings in Greek mythology. They were descendants of the primordial deities born from the Chaos, and they preceded the gods of Olympus, who went on to overthrow them.

Fenrir's default summon attack is Terrestrial Rage, which has usually been localized as "Gaia's Wrath" in other games in the series. Coincidentally, the two worlds featured in Final Fantasy IX are called Gaia and Terra. Fenrir's other summon attack is Millennial Decay, whose name likely refers to the planets' environmental decline in the game's backstory.