Cid Pollendina: Oh, shut up and help me remodel the Fencer (job) page!
Please expand this article into a full one. The following tasks need to be completed:This request can be discussed on the associated discussion page. Remove this notice upon completion.

Fencer (フェンサー, Fensā?) is a recurring job class in the series. In the Ivalice universe, it is exclusive job to the viera, Fencers are equipped with rapiers to inflict damage and status effects to the enemy.

Fencer is a job. It is only available to viera characters. The only non-viera character who is a Fencer is Ritz Malheur. She remains a Fencer until the second act, where she upgrades to the Elementalist job. Eventually joining Clan Nutsy, she reverts to her Fencer job.

Fencer is a job usable by the viera only. Fencer is one of the best starter classes as it has well-rounded stats, high Attack and Speed, with the highest possible HP for any viera class.

Allow this blade to continue fighting for you. Of course, only if it's not an inconvenience.

The Fencer appears as a character and summonable vision. Her job is listed as Fencer.

The Fencer's stats at her highest levels are as follows (with no passive abilities taken into account), along with the maximum amount of stat points that can be increased through pot-enhancements:

The Fencer can equip the following weapons: daggers, swords and katanas.

The Fencer is an asterisk in Bravely Second: End Layer.

The Fencer is a versatile job, capable of switching between offensive and defensive stances with their Swordplay. With their innate ability Muscle Memory, their stance bonuses linger after switching to a different stance. Strong and fast, with good defense, fencers make good combatants in various situations.

The Fencer appears as part of the Crystal Defenders collaboration. 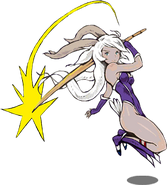 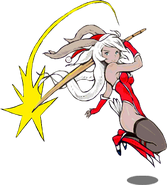