The Federation of Windurst is a country in Final Fantasy XI. Windurst lies on the eastern Mindartia continent of the planet Vana'diel south of the region referred to as Kolshushu.

Tribes of Tarutaru from the sweeping grasslands and neighboring islands of southern Mindartia united to form this league of states. It is governed by a council of representatives from the five ministries of magic, legacies of the five founding tribes. Their decisions are based on the prophecies of the mystic Star Sibyl who resides in the fabled Heaven's Tower.

In one section of the city live the Mithra, a race of natural hunters whose skills have brought a new source of wealth to Windurst. The capital, Windurst City, is a thriving city of magic and trade. Centered around a giant tree of unknown origin, it can barely be imagined that 20 years ago it was leveled in the war. The Federation itself is surrounded by the vast fields of Sarutabaruta (an ancient Tarutaru word for "land of prophecy"), a wild grassland home to many unique species of plants.

A highly advanced form of magical energy is used in many aspects of Windurstian life. The doll-like Cardians and brightly glowing fluoro-flora are just a few examples of this power put to practical use. Industry in Windurst also includes the refinement of bronze, but the use of metallic substances is generally not favored. The individual cultures of the Tarutaru and Mithra tribes are respected and treasured, and evidence of this can be seen in every area of the city.

The Federation of Windurst was the hardest hit by the ravages of the Crystal War, but with the assistance of the Mithra, the damage has been completely repaired. Tarutaru culture is far from materialistic. In relation to the Tarutaru's small size, their residences are spacious and comfortable. The city always has an abundance of food; Tarutaru magic enhances crop yields, and the Mithra use their hunting and fishing skills to keep the markets overflowing with meat and fish.

The environment surrounding Windurst does not receive large amounts of precipitation, but nevertheless features numerous rivers and streams. The warm climate has encouraged the Tarutaru to grow a wide variety of crops, which they cultivate and harvest with the help of magical techniques. Many of these crops are exported to other countries. Tarutaru farmers also raise rabbits known as "rarabs", while the Mithra in Windurst Woods raise towering dhalmels. This livestock provides Windurst with a source of milk, meat, and leather.

The Federation Forces of Windurst are led by a Warlock Warlord, chosen once a year from the Parliament of Patriarchs, and consist of twelve brigades of War Warlocks and four brigades of Mithra Mercenaries.

The body of the Federation Forces is comprised of twelve brigades. Each brigade is led by a Master Caster, who is advised in strategy and command matters by several Wise Wizards. The actual fighting is carried out by the eight Caster Companies, each headed by a Caster Captain who commands thirty veteran soldiers known as Combat Casters.

A Caster Company is further reinforced with one hundred Cardians controlled by a group of Tactician Magicians. Combat Casters must undergo several grueling testing procedures before being accepted into the War Warlocks, so their level of expertise in the magical arts is exceptionally high. While the number of War Warlocks is relatively low, their power can turn the tide of a battle.

A mercenary organization comprised chiefly of Mithra. There are four brigades in the Mithra Mercenaries, and, unlike other nations, they are not a permanent part of the Federation Forces. The free-spirited Mithra, despite being the central element of the army, did not wish to become a regimented force; the Mithra selected to choose the looser structural organization of a mercenary force.

The Mercenary Major has several Mercenary Companies under her command, but this number can rise or fall depending on the hunting season. Each Mercenary Company is led by a Mercenary Captain, with around one hundred mercenaries assigned to each company. These companies are often joined by an extra fifty or so Freeswords, inexperienced soldiers that come under the tutelage of the veteran mercenaries.

A unit charged with the protection and security of the various ministries and the Parliament of Patriarchs. For the sake of security, their numbers and equipment have not been made public, though the unit is thought to hold close to one hundred members.

The flag of Windurst represents the Distant Glory - Heroes storyline, which is focused on Shantotto, and the Federation's background music serves as its background theme. 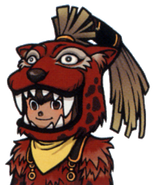 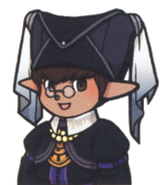