A study hat adorned with a rather garish feather.

Feathered Cap, also known as Feathered Hat, Feather Hat (羽根付き帽子, Hane-tsuki Bōshi?), or Plumed Hat, is a recurring hat in the Final Fantasy series. It is normally a low to mid-rank piece of equipment.

A light cap woven of silk.

Feathered Cap is a high-rank hat usable by all classes but Monk, White Mage, and their upgrades. It only appears in the PSP/iOS remakes in the Lifespring Grotto. It provides +4 Defense, +1 Weight, and +9 Evasion.

Light cap made from silk thread.

Feathered Cap (originally translated as Leather Cap) is a low-rank hat equippable by most of the cast. It provides +2 Defense, +3 Magic Defense, -4 Evasion, +3 Magic Evasion, +5 Strength, and protects against Confuse. It can be bought for 330 gil at Troia.

Feathered Cap can be equipped by every character. It can only be be dropped by Rukh found in the Eblan area. It has a defense of 2, magic defense of 3, evasion of -4, and magic evasion of 3.

Feathered Cap provides +2 Defense, +3 Magic Defense, -4 Evasion, and +3 Magic Evasion. It can be bought for 330 gil in Mysidia, Tomra, Fabul, Troia, Mist, and Damcyan, dropped Zu and Rukh, or found in Passage of the Eidolons (Rydia).

Plumed Hat is a low-ranked hat that provides +2 Defense, Weight, and Magic Defense, and +5 Magic Evade. It can be bought in Karnak and Crescent for 350 gil or stolen from Calofisteri or Tonberry.

Plumed Hat is a headgear used by everyone but Umaro. It grants +14 Defense and +9 Magic Defense. It can be purchased at South Figaro, Gau's father's house, Mobliz, and Nikeah, stolen from Merchant, and is initially equipped on Strago, Relm, and Gogo.

The Feather Cap is an accessory that allows HP, MP, and AP to break up to triple the maximum limit.

When used as a Materia Fusion ingredient it adds HP+10% to the resulting Materia.

The Feather Hat is a low-rank hat used by everyone except Steiner, Amarant, and Freya. It provides +7 Magic Defense, +1 Spirit, and increases the user's Wind-elemental damage. It can be bought for 200 gil in Dali and Black Mage Village, and teaches the abilities Add Status and Bright Eyes.

In the original version, the Feathered Cap is a low to mid-rank mystic armor hat that provides 18 Magick Resistance and 5 Magic and requires 25 LP to equip. It can be bought for 1,900 gil to buy at Rabanastre and Jahara after the events in Tomb of Raithwall, or from the bazaar by selling Water Stone x5, Braid Wool x2, and Tanned Hide x2 and 3,280 gil as part of the Traveler's Garb. The bazaar set can be acquired much earlier than the hat is available at shops.

In the Zodiac versions, the Feathered Cap now provides 18 Magick Resist, 40 MP, 5 Magick Power, and requires the Mystic Armor 4 license for 25 LP. It can be bought in Jahara and Mt Bur-Omisace for 1,900 gil, found as a treasure in Giza Plains - The Rains (Warrior's Wash) and Trial Mode Stage 53 (with Diamond Armlet), stolen from Red Chocobo (3%) and Brown Chocobo (Dalmasca Estersand - 3% chance), and is made in the bazaar for 1,890 gil after selling the same items as before. It can be equipped by the White Mage, Red Battlemage, Black Mage, and Bushi.

A sturdy hat adorned with a fluffy white feather.

Plumed Hat (Feather Cap in the PlayStation version) is a low-ranked hat that grants +16 HP and +5 MP. It is bought in Chapter 1 for 500 gil.

Sturdy cap with a long feather.

The Feather Cap is the weakest hat, providing a mere +2 Weapon Defense and +4 Magic Resistance. It can be purchased from any liberated town for 297 gil and 315 gil from occupied towns.

The Plumed Hat is the weakest hat, providing only +2 Defense and +5 Resistance. It can be bought for 100 gil in the shop and is sometimes a reward for completing missions without breaking the Law.

A fine and dandy cap adorned with a feather. For all tribes.

Feathered Hat is a mid-ranked headgear that can be used by any race and gender. It provides 37 defense at level 1 and 77 defense at level 30, and has one empty slot. It can be created for 450 gil by using Fine Leather x3, White Dust x5, and Phoenix Down. When turned into a jewel, a level 3-9 Feathered Hat makes a Vegetarium, level 10-19 makes an Anti-Time Stone 4, and level 20-30 makes an Anti-Stun Stone 6.

Plumed Hat is a level 1 hat that provides +68 Bravery. It can be obtained by trading 700 gil.

The mysterious feather from a magical beast adorning this hat is said to be part of its defensive qualities. This was discovered when a certain feathered cap's defenses were compared to those of the same hat without the decorative plume. Thereafter people began searching for even more effective decorations for their hats, which lead to a great variety of feathered caps to be produced. Apparently the stronger the beast the feather comes from, the more protection this hat will grant.

Feathered Cap is a Hat obtained by crafting it using 20 gil, x1 Thickened Hide, and x1 Raptor Feather, and finding it in Town of Mitra. It provides 3 DEF.

The Wind Spirit Cap is the ultimate headgear for Hawkeye should he undergo the Lightmost path of the Thief, the Nomad. It is a green archer's bonnet with a gold trim border, a golden wings crest on its front, and an ethereal blue feather adorning its side, said to evoke the imagery of a vast meadow under a sunny sky. This hat is said to be bestowed by Jinn, the Mana Spirit of the wind, and those who wear it gain his blessings and those of nature and mother earth to protect them.

In Bravely Default, Feathered Hat provides 3 P.DEF and 1 M.DEF. It can be bought in Ancheim for 100 pg. 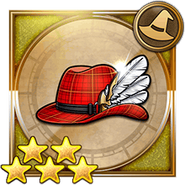