Fauregandi is a region of northeastern Quon in Final Fantasy XI. It was a populated area in ancient times and a key theater during the Crystal War. In the present day, however, it is simply a frozen wasteland that most citizens of Vana'diel do well to avoid.

The following area is subject to Conquest. 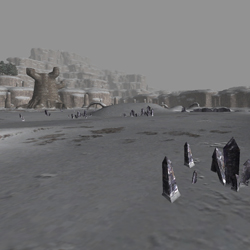 The Beaucedine Glacier is the icy sheet that covers most of the Fauregandi region. Raging blizzards frequently block the visibility of those attempting to navigate its winding valleys. When the snow clears, ruins from two distinct architectural styles can be seen among the desolation. These give budding archaeologists several sites at which to focus their attention.

The glacier boasts a number of Gigas and Goblin inhabitants. It also features a remarkably robust tiger population.

A passage in southern Beaucedine leads to an isolated section of Batallia Downs. Another route in the northwest connects it to Xarcabard. The Fauregandi region's outpost lies roughly at the area's center.

Ranguemont Pass is a long, narrow tunnel running between East Ronfaure and the Beaucedine Glacier to the northeast. As it exposes the Kingdom of San d'Oria to the myriad threats of the Northlands, its deeper reaches are barred by a gate and guarded by a cadre of knights. Beyond this barricade roam a range of foul creatures, including members of the Hecteyes and Ahriman families.

Fei'Yin is the remains of an ancient Zilart city that rises above the northern Beaucedine Glacier. It was the objective of the famous Multinational Expedition that braved the Northlands ten years before the Crystal War. Though it swarmed with vile creatures at that time, the armies of the Alliance of Altana exterminated most of Fei'Yin's foul inhabitants in the wake of the conflict. It remains haunted by unholy ghosts and shadows—and strange devices yet patrol its halls—but it is no longer the insurmountable nightmare that faced the storied expedition.

Qu'Bia Arena is an subsection of eastern Fei'Yin. Though its ascending rows of seating no longer draw spectators, its ground occasionally hosts contemporary battles. At the end of the Great War, the Alliance of Altana used the arena as the focal point of a seal intended to contain the evils of the Northlands.

The Cloister of Frost is a chamber of lower Fei'Yin constructed around the protocrystal of ice. It is through this chilling phenomenon that the avatar Shiva may be encountered.

Pso'Xja is a collection of extensive, mostly subterranean ruins that lie beneath the Beaucedine Glacier. The six towers that function as its entrances closely resemble those seen across Sarutabaruta. Researchers eager to explain this likeness must first contend with the Tenshodo, however, as they regard Pso'Xja as their property.

Venturing beyond the Diremites, Tonberries, and other beasts that have come to inhabit Pso'Xja, one may discover the darkness of Promyvion.

The Shrouded Maw is a secluded chamber at the deepest level of Pso'Xja. Its glowing pedestal is a portal to the realm of Diabolos, the avatar of dreams.