Quest: Mysidia and the Eidolons

The Fat Chocobo is an earth-elemental Eidolon that appears in Final Fantasy Dimensions II. The signet can be obtained for Morrow as a first-time completion reward for completing the Mysidia and the Eidolons sidequest in the Ancient Era.

At the time the signet becomes available in Chapter 2-1, it will be able to provide Morrow with a large boost for his max HP, however provides lackluster boosts for his other stats. Aside from the Fat Chocobo’s usefulness during Chapter 2-1 of the game, the signet is easily outclassed as the player progresses through the game and obtains stronger signets.

The Fat Chocobo summon is based on the recurring creature in the series. As the summon evolves, it begins to depict the Chocobo surrounded by a rain of Gysahl Greens.

The Fat Chocobo’s special attack is Choco Press, which deals small earth-elemental damage to all enemies. Summoning the Chocobo costs 1 bar from the Summon Gauge.

The following are the abilities Morrow can learn from the Fat Chocobo:

In the original free-to-play versions of the game, the Fat Chocobo signet could only be obtained through the game's summon draw shop and could be equipped by any party member.

In addition. in the free-to-play version of ‘’Final Fantasy Legends II’’ there was a unique version known as Fat Chocobo (Rooster) (でぶチョコボ・酉, Debu Chocobo - Tori?, lit. Fat Chocobo - Rooster). The name served as a reference to the new year of 2017 being the Year of the Rooster. It was an earth-elemental god-tier signet that could only be obtained through participating in the "New Year Fat Chocobo" raid event. The signet depicted more cartoonish designs of a white Fat Chocobo. The god-tier version taught the Chocobuckle ability and had the Freeze Spacetime summon attack. The signet could be equipped by all party members. The signet artwork was designed by series artist Ryōma Itō. 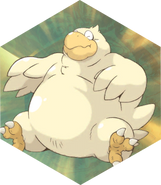 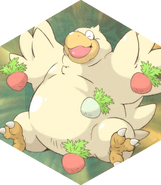 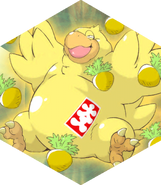 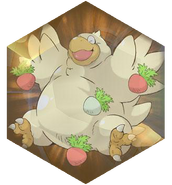