The Farplane is an alternate dimension in the realm of Final Fantasy Brave Exvius. It is said that many secrets lie within the Farplane itself, and it is the home of moogles. It will serve as the primary setting of the game's third season.

The Farplane can be accessed via Farplane Monuments: dark, floating, glowing obelisks located throughout the world in towns and villages. For the players' easier access, the Vortex is also located at the Home menu.

This section about a location is empty or needs to be expanded. You can help the Final Fantasy Wiki by expanding it.

A truncated tower that opened after the Earth Crystal was shattered, home to multiple powerful enemies that guard unique items.

Home to King Mog and his guards. The King can be found in King Mog's Chamber. The King is capricious and loves collecting things, leading to his throne to be littered with trinkets and Star Quartz that once called his attention. The King is a shopkeeper for event currency.

Within the Castle, the arena crystal can also be found, which allows players to fight others online.

At the steps of the Farplane Castle lies the Dimensional Vortex, a swirling hole in space. Accessing it allows the player to participate in trials through the Chamber of the Fallen, to obtain materials and other farming items through the Vortex of Desires and participate in Events.

A truncated tower that opened after the Wind Crystal was shattered, containing an Abominable Wooden Soldier that serves as a training dummy.

Upon global release of Brave Exvius only the Vortex was available. However, through the updates the game has received, more of the Farplane has become accessible. 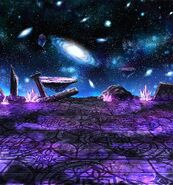 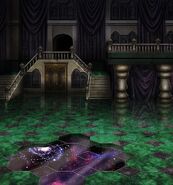