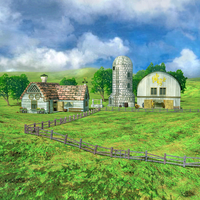 "Farm Boy" (牧場の少年, Bokujō no Shōnen?) is a background theme from Final Fantasy VII. It was composed by Nobuo Uematsu.

"Farm Boy" is the background theme to Chocobo Farm. It is the fifth track of the Final Fantasy VII: Original Soundtrack second disc.

"Stella's Ranch" is an arrangement of "Farm Boy" by Yuzo Takahashi and is the fifth track of the game's original soundtrack.

A piano arrangement of this theme by Shiro Hamaguchi and performed by Seiji Honda is included on this album, as its eight track.

The arrangement of Farm Boy is called "Tabun Sayanora" ("This is Probably Goodbye"). The lyrics are by Kazushige Nojima, the original music by Nobuo Uematsu arranged by Yuji Hasegawa. Manami Kiyota sings the vocals.

"Farm Boy" was included on this best-of compilation of Final Fantasy VII music as the fourth track of the album.

"Farm Boy" is included on the second disc of this collectors' edition.