Start a Wiki
watch 13:49
World of Final Fantasy: Faris Boss Fight
Do you like this video?

Faris, along with Lenna, Galuf, Krile, Bartz, Cid, and Mid, appears at the end, when Mid can rest in peace. Legend of the Crystals is a four-episode anime OVA released in Japan from March to July in 1994, and the United States from 1997 to 1998. The series' setting takes place 200 years after the events of Final Fantasy V, and follows Linaly, Bartz's descendant, and her friend Prettz.

One of the various garbs available for Lightning is Splendid Admiral, Faris's attire as envisioned by Yoshitaka Amano. It can be purchased in Armor Alley or Hawker's Row in Yusnaan starting from Day 8 for 5,000 gil, the prize alluding to the original game. The Splendid Admiral garb bestows Bravery when Lightning changes schemata with 10 ATB or less. Its fixed ability is Guard Lv. 3. 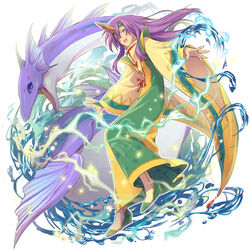 Alt Phantom Stone.
Add a photo to this gallery 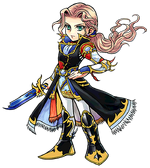 Faris appears as a playable character, based on the design by Yoshitaka Amano. She can be recruited during the Lost Chapter Of the High Seas. Faris is primarily a Melee attacker and wields daggers in combat.

The crown princess of Tycoon and Lenna's elder sister, Faris was lost at sea as a child when the ship that she sailed upon capsized. To her good fortune, she was found by the wild brigands that sail the seas and has lived as a pirate ever since. Capturing Lenna when the younger princess tries to commandeer her ship, Faris sees that they carry the same pendant and is forced to recall the truth of her birthright.

Faris appears as an unlockable character, and is obtained by collecting Crimson Crystal Shards.

Her appearance is based on her original pirate captain design by Yoshitaka Amano. From the iOS port onwards, her appearance is altered to incorporate her SD appearance, giving her grey-purple hair, green eyes, and a different sword also shown in Amano's artworks.

The pendant that rests on Lenna's breast will mark the start of Faris's journey. She has lived as a he and as a pirate since her early days, but somewhere in her heart are the half-remembered words of her father...

Faris is an unlockable character, and is obtained by collecting Purple Crystal Shards. Her altered appearance from the iOS version has become her standard appearance for the Theatrhythm series.

Faris is a playable character, and is available to select from the beginning.

Faris appears as a playable character. Her initial weapon is the Baselard.

Faris's sprite.
Add a photo to this gallery

A female pirate captain whose many crewmembers hold in high regard. Her speech may be rough, but she's very friendly at heart. She comes to know her own origins when she discovers she has the same pendant as Lenna.

Faris appears as a summonable Legend in Final Fantasy Airborne Brigade. She uses Thunderstorm to assist the player.

Sword Dance (UR+).
Add a photo to this gallery

Sword Dance (UR+).
Add a photo to this gallery

Faris is a playable character who could be recruited during the Challenge Event Successors of the Dawn as the First Time Reward for completing the event's Drakenvale stage in Part 1. She was also available in The Malice Within. 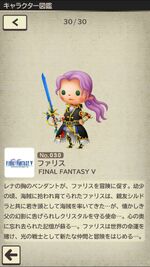 Faris appears as a summonable vision, available since the exploration event The Big Bridge. She is a 3-5★ unit, her job is listed as Pirate, and her roles are Physical Damage and Support. Her Trust Master rewards is the passive ability Syldra's Protection.

Faris is mentioned in the ability card description for Syldra. 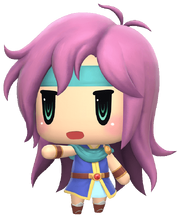 A pirate captain whose ship is berthed at the docks of Saronia. A gifted fighter, Faris is also best friends with a sea dragon named Syldra.

Faris appears as a supporting character.

Notes: Presents as male / Drop-dead gorgeous / Captains a crew of pirate moogles / Thinks of Syldra as family and can converse with her

In League
Even before meeting Lann and Reynn, Faris had her suspicions about the newly federated Saronia. This is why she formed a mutually beneficial relationship with a certain organization.

Her Sworn Enemy
Faris's family has spent generations searching for a Mirage that crossed paths with an ancestor many long years ago...

Fighting Friends
For some of you, it was obvious the moment Quistis showed up, but the "certain organization" Faris teamed up with is SeeD (one part of the League of S).

Quistis had come to Saronia to investigate the new chain binding the city and why the land stayed frozen year-round. However, it didn't take long for her to run afoul of the feisty pirate Faris. Thankfully, beating the stuffing out of each other fostered a sort of mutual respect that developed into a strong friendship.

Since then, Quistis has helped Faris run goods, and Faris has been a valuable asset in the League's covert operations.

Leviathan
Apparently the Mirage who hurt Faris's ancestor was Bismarck, not Leviathan. Still, haughty as she is, Leviathan is not completely without conscience. Even if Reynn and Lann had not intervened on Faris's behalf, you can be certain the Queen of the Sea would have sought Bismarck out and done him in.

The Grymoirian Faris
Faris has not forged relationships with the people she knew in her original world, nor does her sister seem to exist here either. As a result, Faris has had no reason to get in touch with her feminine side. But in that sense, Grymoire has allowed her to be herself.

Faris.
Add a photo to this gallery

Trading card depicting her with Bartz.
Add a photo to this gallery

Faris as a Gladiator.

Faris as a Gladiator.

Faris as a Gladiator.
Add a photo to this gallery
Final Fantasy V characters
World of Final Fantasy characters
Retrieved from "https://finalfantasy.fandom.com/wiki/Faris_Scherwiz/Other_appearances?oldid=3237349"
Community content is available under CC-BY-SA unless otherwise noted.