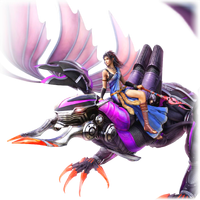 "Fang's Theme" (ファングのテーマ", Fangu no Tēma?) is the character theme of Oerba Yun Fang in Final Fantasy XIII. "Fang's Theme" is a short, uplifting orchestral piece, something unusual for a character of the "strong, serious female" archetype.