Central shrine on the Isle of the Megalith. A natural cave leads to the dais holding the auralith within, the sole auralith whose location is known to the aegyl.

The Fane of Tehp Qul is a location on Tormelados, Isle of the Megalith, which is an island from Lemurés in Final Fantasy XII: Revenant Wings. It is a temple which holds the first Auralith that the party finds. It is also there where the party first meets the Judge of Wings.

After saving the aegyl, the party heads for the shrine holding the auralith, but a watch has already been posted outside! How does Vaan plan to sneak past?

Vaan must journey alone past the watch to reach the entrance to the Fane in the northeastern part of the map. 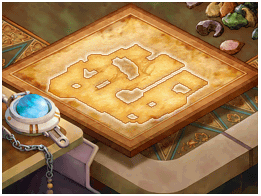 Having slipped past the watch, the party continues toward the inner chambers of the shrine in search of the Auralith. What they find is beyond their imagination. 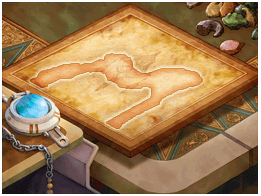 Although the party succeeded in defeating the sky pirates, they were not quick enough to prevent damage to the Auralith. As they examine the cryptic device nearby, ominous footsteps draw near.

After showing the party a troubling vision, the Judge of Wings destroys the Auralith. As Vaan and the others give chase, they happen upon unexpected company.

Alerted to the presence of a precious material at the Fane of Tehp Qul, the party moves in to investigate. Tomaj dismisses warnings of monsters in the area, but how safe is it?

The Solid Stone Material Node in the northern part of the map must be mined to complete the mission.

Unbound Yarhi run rampant in the holy shrine. Are sky pirates behind this latest disturbance, or is something else at work? Either way, the Yarhi must be stopped.

To win, the enemy Summoning Gate must be sealed.