With the white ones, I was born...

Famfrit is the totema of the moogles in Final Fantasy Tactics Advance, and is the first totema fought by Marche Radiuju. After being defeated, Famfrit can be summoned by any moogle member of Clan Nutsy, including Montblanc. A Deph of Famfrit also appears during the fight with Queen Remedi in her Battle Queen form.

As Famfrit is the totema of the moogle race, he possesses two abilities of the Time Mage (a moogle job): Demi and Slow.

Famfrit is accompanied by two Floateyes and two Ahrimans. It is best to take out the Ahriman on Famfrit's left first, because it usually starts out with its deadly attack Roulette. It can be taken out easily by a mid-level Black Magic. Players can also move a unit into the Ahriman's move range of 5, which will lure it towards the party for a physical attack instead of using Roulette. If the Ahriman is let alone, it may actually KO one of its own allies with Roulette.

Famfrit mostly attacks with Demi, but he uses Breath of God every once in awhile, usually after the player K.Os a Floateye or an Ahriman. The player should use a Combo when possible to defeat him. It is recommended to give another clan member a Combo if possible.

Marche and a Paladin can deal with Famfrit, and Montblanc or another Black Mage can fight the other enemies. A Bishop or White Mage can keep Marche and other important clan members alive.

As a boss, Famfrit's stat growth is considerably better than normal job classes. He has the highest Defense and third-highest HP of all totema, giving him incredible endurance against physical attacks, as well as impressive Attack, Magic Power, and Magic Resistance. His MP and Speed are only average, however. 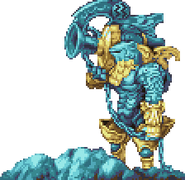